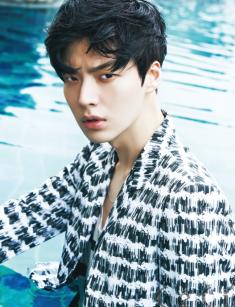 The actor gained wide popularity thanks to participating in TV projects, especially in Korean dramas and collaborations with Chinese producers. Besides his acting career, he is a successful model who appears on covers of popular magazines and in commercials.

The actor and model had a quiet and peaceful childhood. He raised in Seoul in a big family. As a child, Ahn was very calm and different from his siblings. He preferred to stay alone, liked cooking more than childish games. He hadn’t passion for knowledge and hated to spend hours digging in books. As he wasn’t interested in academic subjects, that’s why the boy decided to find the profession more appropriate for him. At the same time, the sharp intellect helped him to get good marks and became the example for other children.

At high school, the teenager still hadn’t any idea what he wanted to do; that’s why he decided just doing what he liked. He took cooking classes and attended a music academy. He also studied fashion, and this area gradually became the main passion for him. Having a perfect physique and self-confidence Ahn decided to try himself in modeling. As it turned out, the fashion industry was made for him, the young man quickly became a popular and successful model, and soon signed the contract with the modeling agency.

His path to success started in 2009 when the model appeared in several commercials. He also appeared on covers of magazines and finally got his first role in the TV project. The show “High Society” became a lucky ticket for the young actor, and his life began radically changing. He played a small role, but people loved him. The model became very demanded and loved TV personality. His popularity allowed him to take role after role and gather a good fortune. Besides his success on TV, Ahn is a successful model, who got several prestigious awards. He worked with many famous designers and felt like a duck to water.

Being rather famous and influential media personality, the actor was invited to stare in music videos for artists. His rising fame helped the promising actor to get the first significant role in TV series “My Love from Another Star.” Thanks to his adorable appearance, the show got tremendous success and popularity. His work gained positive critical reviews, and the actor continued to receive more exciting and beneficial acting offers. In 2014 Ahn’s fame kept growing when he appeared on the comedy TV series “You’re all surrounded.”

In 2015 he played the leading role in TV series, where he played a vampire suffering from loneliness. His successful portrayal brought him several nominations for acting awards. In 2016 he appeared in the romantic comedy playing the role of a playboy who fell in love deeply. Ahn took part in the Chinese project “Perfect Imperfection” thanks to this work his fame spread in China. In August 2019 the actor confirmed that he would appear in the new drama “People With Flaws,” besides he appeared on the cover of Cosmopolitan this summer.

The actor has married to the Korean actress Ku Hye-Sun since 2016. They met each other, working on the same project, “Blood.” The preferred humble marriage ceremony and donation to waste money on a lavish ceremony. Though the couple hasn’t got children, the photo of newlyweds with a baby circulated on the Internet. In 2019 his wife shared a post on Instagram were shared that her husband wanted a divorce. The actor is a cat lover. He calls his cat his best friend. At present there is no exact information about Ahn Jae Hyun's net worth.