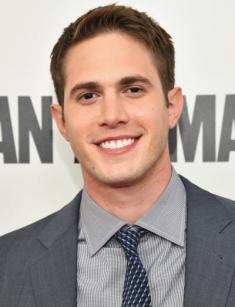 Blake Alexander Jenner is an American actor and singer who gained recognition mostly after his appearance as Ryder Lynn on the musical series Glee. Besides, he starred in various movies, including Everybody Wants Some!! (2016) and Billy Boy (2017). By the way, the second movie was also written by Blake.

Blake Jenner was born in Florida in 1992. His parents are Mitzy, and Richard Vernon Jenner and their union gave Blake German, German, French-Canadian, and Cuban descent. Jenner is not the only child; he has three elder brothers.

When Blake was a kid, Jim Carrey and Michael Jackson became his primary inspiration sources. Attending Felix Varela High School, the young actor became a part of drama society and also played football. At the age of nine, Blake started playing drums and writing stories. Especially, Jenner liked comedy and improve, and in 2008, he joined Impromedy, an improve group in Miami.

In this part, we will tell you about Jenner as singer and actor both. So, after graduation, Blake moved to Los Angeles. There he had a lot of jobs, including waiter and parrot salesman, while attending auditions for various acting roles. During that time, Jenner also had improv classes at The Groundlings, and two years later he was at the show with this group. In 2011, the young actor had a role in Wurlitzer, The Truth In Being Right, and the horror film Cousin Sarah. Also that year, Blake appeared on Melissa & Joey as Miller Collins.

In 2012, Jenner appeared at The Glee Project, a reality show and contest: the winner gets a role for seven episodes of the musical series Glee. Eventually, Blake won, and that was mostly thankfully for his talent for singing. His Glee character was Ryder Lynn, and after his appearance, the actor received Teen Choice Award for Choice TV Breakout Star and his contract with Glee was extended. Among other actors who were cast of Glee, there are Dianna Agron, Cory Monteith, etc.

In 2015, Jenner played the role of Adam Foster in the series Supergirl together with his then-wife Melissa Benoist. Next year, the actor appeared as Jake Bradford in the comedy Everybody Wants Some!! with Zoey Deutch and as Darian Franklin in The Edge of Seventeen.

At the Sundance Film Festival in 2017, there was a premiere of The Vanishing of Sidney Hall, where Jenner played Brett Newport. Next year, at the same festival, film American Animals premiered, and Blake had the role of Chas Allen there.

In 2018, Jenner played Christian de Neuvillette in Cyrano at the Norma Terris Theatre in Connecticut. This year, in 2019, he played this role again in an Off-Broadway play. Also in 2019, the Netflix series What/If started airing, and Blake plays the leading role of Sean Donovan together with Jane Levy who portrays his wife.

In 2013, Jenner got engaged to Melissa Benoist who used to be his Glee co-star. In 2015, their wedding took place, and lovers were dancing as they did earlier on Glee, but this time it was off-stage. However, Melissa once commented that the couple had been married longer, supposedly since 2013. Blake’s wife filed for divorce in 2016, and next year the spouses were not together anymore. If we judge from their Instagram pages, both Blake and Melissa got over their break-up, and now they are enjoying life.