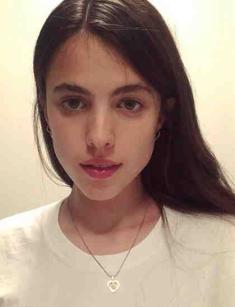 The star child followed the footsteps of her parents, preferring the entertainment industry for her calling. Since childhood, the girl was emerged in the glam world and inspired to be an actress. She tried herself in different spheres – modeling, dancing, and acting and quickly grabbed the spotlight.

Since childhood the girl was devoted to arts – she attended ballet school, studied at the prestigious school of arts and was a student of the ballet theatre. The actress also studied dramatic arts. As a teenager, the 16-years-old girl decided to make a modeling career and modeled for the most fashionable brands and legendary designers.

She is an absolute star child, Margaret has a famed in the art and music industry parents. Her mother is the former model, Andie MacDowell. The family was broken when Margaret was five, and the girl had to spend time equally with each parent. Her father is a musician and model Paul Qualley. The actress also has two siblings. Thanks to their parent's efforts, all children had a happy and nonchalant childhood.

After five months of a prolific modeling career, Margaret changed her mind and decided to try herself in acting. In 2013 she grabbed some spotlight appearing in the movie Palo Alto. The actress played the daughter of the main character on the popular TV series "Leftovers." Three years later the actress appeared on Hollywood movie for the first time. 2019 proved to be a very successful year for her acting career. Margaret appeared on five films, the ninth movie of Quentin Tarantino's "Once upon a time" among them.

The actress worked with a star cast, which includes Brad Pitt and Leonardo DiCaprio. To play the role of Pussycat, the actress had to grow armpit hairs.

As a star child, she came across with body shaming, as the general public and the Hollywood industry demands unrealistic body expectations from the actresses. Margaret overcame body shaming and now feels comfortable in her skin.

Her longest relationship has lasted for two years. She and her boyfriend, Natt Wolff, seemed to be an ideal couple, but they split in 2014. The actress describes herself as a hardworking person; she thanks her mother for years pf supporting and sharing her experience. The actress dated the director Cary Fukunaga in 2017.

In 2019 there are the rumors that the actress dates Pete Davidson.