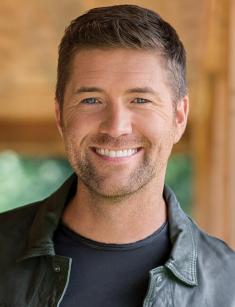 The American gospel singer who has a prolific music career, his songs became immediate hits, and his fanbase is continued to grow. Besides, he is a devout Christian and a devoted family man.

The singer was born in the devout Christian family. He has got a brother and a sister. The boy displayed interest in music when he was five. In his early ages, he became a member of the gospel quartet and sang on the church choir. As a member of the gospel quartet, he traveled around South California. His parents provided Josh a good education and upbringing for the child.

The singer has a distinct musical style with his charm and incredible baritone. His songs are faith-based and reflect the life experience of the artist. His faith-based music attracts different people who make him a very demanded multi-platinum singer. He sold over 12,5 million copies of his album and has got an impressive fortune; thus, his net worth is about $17 million.

His debut song was written in 1997, and the singer drew inspiration after listening to Hank Williams and wrote the song “Long Black Train.” He imagined that running train and people standing beside tracks are a good metaphor of temptation. People are standing and watching at the train of attraction and considering whether to enter it or not. This song had tremendous success. Its first performance happened on the Grand Ole Opry where people stood up and cheered in the middle of the song. He was asked to play it twice, and the crowd’s ovation exceeded.

In 2003 he released his first album; his debut song became very popular while other songs hadn’t the same success. His second album became platinum, and songs like “Me and God” and “Would You Go with Me” became total hits. The third album gifted another run and gained wide popularity.

In 2008 Josh tried himself in acting when he was proposed to play the American Evangelist Billy Graham. His multitalented nature let him unleash the full acting skills. Besides this role was close to him, as he portrays a prominent gospel singer. As a result, the movie with his participation got positive critical reviews.

In 2003 he got married. His wife travels with him when the artist is on tour. She plays keyboards and sings background vocals. The couple has got four sons. In 1996 the doctors diagnosed a lesion of his vocal cord. He attended the voice clinic. The doctors said that there was no need in operation, but the singer had not to sing during a year and let vocal cords heal on its own. That year the singer spent studying classical vocal technique and gaining the particular skill to care for his voice.

The songs of old gospel quartets which he heard at his grandma’s home had a significant influence upon him. In 2014 he published his first book “Man Stuff: Thoughts on Faith, Family, and Fatherhood.” He is also a founder of the charity organization main aim of which is to help gifted teens.

In September 2019 the tour bus with the singer’s team went off an embankment. This accident has resulted in the death of the sound engineer, 64-year-old engineer David Turner and numerous injuries of the crew. The singer was on the other bus which stopped to assist. All remaining tour was canceled, there is no official comment of the singer. The tragedy happened in a 1.5 hour after Turner’s concert in Vina Robles, California. The singer is active on Instagram, where he shares photos of his personal life.