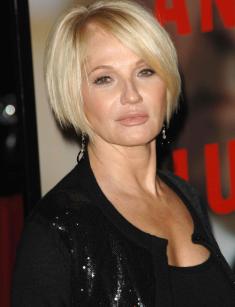 Ellen Rona Barkin is an American actress and producer. Best movies, in which she starred, are Wild Bill (1995), Fear and Loathing in Las Vegas (1998), and Someone Like You (2001). Ellen is often compared to another actress, Cameron Diaz because they really look alike.

Ellen Barkin was born in New York in 1954. Her parents were Evelyn who worked at Jamaica Hospital as an administrator and Sol Barkin who was a salesman. They were Jewish emigrants from Siberia. Ellen also has a brother, George, who by the way worked for the magazines High Times and National Lampoon.

Speaking about Barkin’s education, she attended Parsons Junior High School and High School of Performing Arts. Then, she went to Hunter College, where her priorities were history and drama. Later, she attended New York City's Actors Studio. Generally, Ellen studied acting for almost ten years, and only after that, she landed her first audition.

Barkin’s first noticeable role was Beth Schreiber in Barry Levinson’s film Diner (1982). Next year, she appeared in Tender Mercies. Ellen impressed its director Bruce Beresford at the audition, and he chose her despite her lack of experience. Also in 1983, Barkin starred in the rock & roll movie Eddie and the Cruisers. Later, the actress appeared in some successful movies such as The Big Easy (1987) with Dennis Quaid and Sea of Love (1989) with Al Pacino. In 1995, Ellen starred in the western Wild Bill, where she has the leading role of Calamity Jane.

Barkin also starred in some television films such as Before Women Had Wings (1997) and The White River Kid (1999). For the first movie, Ellen received an Emmy Award as Outstanding Lead Actress in a Miniseries or Movie. In 2016, she started starring in the drama series Animal Kingdom as Janine Cody. This series is based on the Australian movie of the 2010 year.

Besides, Ellen appeared in some off-Broadway plays like Extremities and Eden Court. As her Broadway debut, the actress had the role of Dr. Brookner in The Normal Heart. For that part, Barkin received the Tony Award in 2011.

In 2005, Barkin launched a film production company together with her brother George and her then-husband Perelman. As a producer, Ellen created three movies for now: Letters to Juliet (2010), Shit Year (2010), and Another Happy Day (2011). In the last two films, she also starred.

For 2019, Ellen has a net worth of $60 million that she earned from her acting and producing work.

Speaking about Ellen’s boyfriends, she has been married twice. In 1988, she married actor, Gabriel Byrne. The spouses had two children together, Jack Daniel and Romy Marion. Ellen got divorced with her husband in 1999, but they remained close friends. Byrne even attended Barkin’s second wedding with Ronald Perelman, a businessperson, and philanthropist, in 2000.

Barkin’s union with Perelman ended in 2006 without having kids. Next year after the divorce, Ellen filed a suit against Ronald because of the investment funds which he promised to give to their film production company. Eventually, Perelman was ordered to pay Ellen $4.3 million.

In 2014, at the wedding of Amal Alamuddin and George Clooney Ellen met Ben Emmerson, a lawyer. They started dating and even got engaged, but next year, Barkin called it off.

Ellen has social media pages, where she often expresses her opinion. For instance, in 2019, there will be a new film, A Beautiful Day In The Neighborhood released with Tom Hanks in the leading role. This movie is biographical; it is about Fred Rogers, a television personality who mostly worked for kids. Barkin posted on her Twitter that she did not approve this honor to the TV entertainers because she had an unpleasant experience with Bob Keeshan who is known by his stage name Captain Kangaroo and Shari Lewis who refused to shake the hand of Ellen’s son.