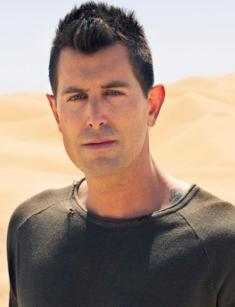 The Christian singer from Indiana who has released eleven albums and gained full recognition. Camp won several awards and was nominated for the Grammy Award. Besides bright creativity, Jeremy shared his personal story of the loss of his wife, losing all hopes and recovering.

The musician was born in the religious family, his father, the pastor, who taught Jeremy playing the guitar. The boy has a bright talent, which was noticed by the leader of the worship team. He gained the leading role in the team and gained popularity in Southern California. Camp has an associate degree in Theology.

The singer released eleven albums and got positive critical reviews. His first album was produced in 2000, since those times he permanently has been nominated on various awards and won several of them. His songs became favorite ones for many people, "Dead Man Walking" and "Empty me" among them. His songs became popular hits in different musical spheres – Inspirational, Contemporary, Rock charts.

People enjoy his musical style, which is quite a unique combination of lyrical ballads and rock. The lyrics of his song are sincere and inspirational. He recorded ten music videos and a special gift for his fans – DVD with one day of his life in tours. Camp underlines that the majority of his songs are based on his experience which he has got during his first short marriage, when his wife died from cancer. He said, “I remember before she died she said to me, ‘Jeremy if I die from this cancer but if even one person gives their life to Jesus it would be all worth it’”.

Though there is no detail about his salary in Internet, Camp's net worth is estimated at $8 million.

He has published autobiography where he shares the hardship of his life, love, loss, and hope. The story of his life proved to be very inspirational and close to many people. In 2020 the movie "I Still Believe" about the true-to-life story of the musician will be on screens where Shania Twain, Gary Sinise, and Britt Robertson will play primary roles. As to the main role of the Christian musician, the actor from New Zealand KJ Apa performs it.

In 2019 the singer released new single and spent much time in tours around the country. He and his band plan a lot of events in autumn, concert in California, Ohio, New York among them.

In 2011 the singer released his first book, revealing his life and overcoming difficulties – early ages, the death of his first wife. She was diagnosed with ovarian cancer and died the year after their marriage.

Two years later the singer married for the second time. The twosome has three children. The singer has been happily married for more than 14 years.

• 2005 He won the award "Male Vocalist of the Year and Rock Recorded Song of the Year" for the song "Stay."

• 2007 Camp won the award "Recorded Music Packaging of the Year" for the song "Beyond Measure."