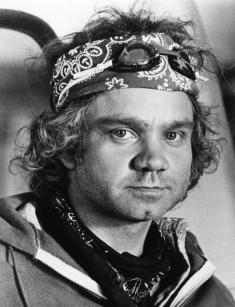 Michael J. Pollard was an American comedian and actor who gained wide recognition for his part in the movie Bonnie and Clyde (1967) as C.W. Moss. Pollard died on November 20, 2019, at the age of 80.

Michael J. Pollard was born in New Jersey in 1939 to Sonia V. and Michael John Pollack; both had Polish origin. Michael’s family had tough times; his father worked 60 hours a week at the O'Rourke's Tap Room. The boy studied at the Montclair Academy.

Pollard started his acting career in 1959 while appearing in the episodes of Alfred Hitchcock Presents. He also depicted Homer McCauley in the TV adaptation of The Human Comedy, the novel of William Saroyan. Also that year, the young actor starred in one of the episodes of the Five Fingers.

In 1962, Michael appeared in two television series, Window on Main Street and The Andy Griffith Show. Next year, he starred on the drama series about life in college, Channing, in the Disney musical Summer Magic, and Tell Me When You Get to Heaven. In 1964, Polland played Cyrus on the Gunsmoke and Ted Mooney on The Lucy Show. In 1965, he appeared on the drama Honey West together with Anne Francis.

In 1966, Polland played the role of Bernie on the I Spy among other actors, including Robert Culp and Raymond St. Jacques, and also Stanley in The Russians Are Coming, the Russians Are Coming. Michael’s distinctive feature was his height (5' 6'' or 1.68 m), which let him portray youthful parts, for instance, the teenage leader at the children’s planet in the Star Trek series in 1966. Also that year, he appeared in the first season of Lost In Space.

In 1967, Michael portrayed C. W. Moss in the famous crime film Bonnie and Clyde with Warren Beatty and Faye Dunaway in leading roles. For that part, the actor received two nominations and won a BAFTA Award. Also, in 1967, he had the primary role in the drama Niagara Falls. Two years later, Michael starred in Michael Winner’s comedy Hannibal Brooks. In 1970, he played the central role of Little Fauss in the Little Fauss and Big Halsy, and in 1972, he appeared in Dirty Little Billy, the movie that represented the biography of Billy the Kid, a criminal.

In 1974, Polland starred in the first episode of Movin' On as an ill young man with cancer. In 1980, the cult movie Melvin and Howard was released with Michael in a supporting role. Six years later, he starred in the series Leo & Liz in Beverly Hills, which eventually failed. In 1988, Pollard starred in the horror American Gothic and the Christmas movie Scrooged as Herman. In the 21st century, the actor continued working and appeared in the cult classic House of 1000 Corpses in 2003.

Before his death, by 2019, Pollard’s net worth was estimated at approximately $1.5 million.

Speaking about his life, Michael was married twice. His first wife was Beth Howland, also an actress, whom he married in 1961. The spouses had a daughter Holly together, and in 1969, they got divorced. From his second marriage to Annie Tolstoy, Pollard has a son, Axel Emmett Pollard.

As he said in one of his interviews, one of Michael's closest friends was Janis Joplin, a rock and blues singer. They used to go together to the vintage boutique Limbo in New York to choose a stage image for Janis.

On November 20, 2019, Pollard died at the age of 80. The cause of death was a sudden cessation of the function of his heart.