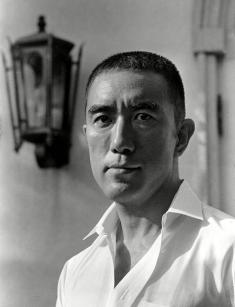 Japanese literature of the 20th century has many outstanding and significant representatives, but author and playwright Yukio Mishima traditionally has a special place. The writer’s works include the novels “Confessions of a Mask” and “The Temple of the Golden Pavilion," which became the classics of world literature and were nominated for the Nobel Prize in 1968 thanks to the style that demonstrated the fusion of the East and modern West.

Yukio Mishima, whose real name was Kimitake Hiraoka, was born on January 14, 1925, in the Yotsuya district of Tokyo, now located in the modern Japanese city of Shinjuku.

His father, Azusa Hiraoka, was a government official and highly educated, intelligent man, and mother Shizue Hashi came from a family of literature lovers who had served Maeda clan who lived in the Kaga Province. The boy had grandparents, as well as a younger sister, Mitsuko, who died of typhus at the age of 17, and brother Chiyuki, who was born in 1930.

In childhood, Mishima was separated from his peers and brought up by the grandparents, who were patronized by members of the Arisugawa dynasty, the representatives of the younger branch of the Japanese Imperial Family.

Only at the age of 12, Yukio moved to his parents' house, but his life did not become more comfortable. The father, who had a passion for military discipline, did not like the boy's interest in human sciences; and regularly raided his room in search of essays and books.

On the contrary, the mother protected Mishima from her husband’s aggression and was the first to read new works of her son, written at night and in between lessons at school and lectures at the university. It was a creativity that gave the young man strength to study, and he joined the ranks of the students who got the opportunity to build a brilliant career in the Finance Ministry. However, he completed it a year later, being supported by his father, who suddenly softened his stance.

In 1945, after the surrender of Japan and the end of World War II, Mishima devoted himself to writing and began to create short plays, poems, and essays. In 1946, Yukio wrote the debut novel "Thieves" and joined the ranks of famous writers who lived in the East during the difficult post-war period.

The author consolidated his success after the publication of the semi-autobiographical book “Confessions of a Mask," which narrated about the confrontation between society and a young homosexual. Thanks to the unusual themes and style in Japan, Mishima became famous overnight, and his works were published abroad.

When he became the leading representative of Japanese literature, Mishima decided to get acquainted with other countries. As an employee of the Tokyo newspaper, he went on a trip that was partially described in the novel “Sound of the Waves," based on the ancient Greek legend of Daphnis and Chloe. The author was influenced by the German writer, Thomas Mann, and the Asian esthete, Mori Ōgai. He began to observe contemporary events and wrote the novel “The Temple of the Golden Pavilion."

It was difficult for the writer to accept the contradictory reviews of critics and readers, which became even more severe when they refused to stage the new play “The Harp of Joy." It happened because, in the late 1950s and early 1960s, Mishima became interested in politics and protested against the radicals in a restrained manner.

However, thanks to the devastating critique published in Japan, Yukio became well-known in Europe and the USA, which guaranteed the success of the tetralogy "The Sea of Fertility", consisting of the novels "Spring Snow", "Runaway Horses", "The Temple of Dawn" and "The Decay of the Angel". It led to several nominations for the Nobel Prize in Literature, which he lost to Guatemalan colleague Miguel Ángel Asturias and his teacher, Yasunari Kawabata.

The character of the talented and hardworking writer demanded that his beloved woman understand him and have a similar nature and spirit. So, Mishima married only in 1958. Yoko Sugiyama was an ideal woman for the author since she was connected with art and was the daughter of a famous Japanese artist.

Their family was strong, and thanks to a stable income, Yukio built a Victorian estate and lived there with his wife and two children for 12 years.

After his death, which caused a lot of rumors, the journalists began to air dirty laundry and found out that the writer sometimes visited gay bars and had a relationship with his colleague, who confirmed it and showed their letters. The family could not bear such an insult and clear the name of Mishima through court action.

At the end of his life, Mishima plunged headlong into politics and became a sworn enemy of the leftists and nationalists for his commitment to the Bushido, the code of the samurai, and the military organization Tatenokai ("shield society"), which he founded.

On November 25, 1970, the most devoted members attempted a coup d'etat, which failure forced the writer to perform seppuku, an ancient ritual, stabbing himself in the abdomen. Yukio’s assistants were supposed to prevent the agony of suicide, severing his head, but, according to eyewitnesses, it took them three attempts to do it.

Thus, the writer could not show the world the beauty of samurai ritual suicide, but he remained a person who fell into the trap of opposition and remained forever incurable.

• "Those who consider dreams to be mind games are mistaken. No, dreams are the opposite; they help escape the mind."

• "The past does not only draw us back to the past. There are certain memories of the past that have strong steel springs, and, when we who live in the present touch them, they are suddenly stretched taut, and then they propel us into the future.”

• “The highest point at which human life and art meet is in the ordinary. To look down on the ordinary is to despise what you can't have. Show me a man who fears being ordinary, and I'll show you a man who is not yet a man.”

The Sea of Fertility tetralogy: