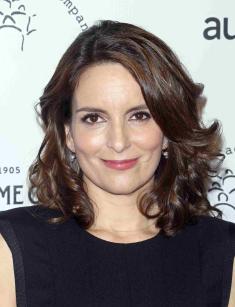 Elizabeth Stamatina «Tina» Fey is a famous American actress, comedian, and media personality. Tina's career boom started in the 2000s. The woman came to prominence after starring on the NBC sketch comedy series Saturday Night Live (1997–2006) and creating the acclaimed comedy series 30 Rock (2006–2013) and Unbreakable Kimmy Schmidt (2015–2019). She has been awarded with many honors for her brilliant acting. Due to her popularity, the celebrity has even been named «the new Harry Potter.» So, let's emerge in Tina Fey's biography!

Elizabeth Stamatina Fey's birthplace is Upper Darby Township, Delaware County, Pennsylvania. She was born there on May 18, 1970 to the family of Donald Henry Fey (1933–2015), a veteran, university administrator for the University of Pennsylvania and Thomas Jefferson University, and a grant proposal writer who raised $500 million for schools, hospitals, and public service agencies through proposals and direct mail appeals and Zenobia «Jeanne» (née Xenakes), a retired brokerage employee born in Piraeus, Greece. Tina was not the only child for her parents. Besides her, they had a son Peter – he is eight years older than the girl.

Fey's maternal relatives were born in Greece – due to her grandmother, who left for the USA, the family settled down there. Besides, Tina Fey is of English, German, Northern Irish, and Scottish roots. Among her ancestors, there was John Hewson (1744–1821), a textile manufacturer who immigrated to America with the support of Benjamin Franklin.

At an early age, Tina Fey became interested in comedy. Her parents introduced it to her. So, they were fans of Saturday Night Live, Monty Python, and old Marx Brothers movies. Tina's father even allowed the children to watch The Honeymooners until it was very late. Interestingly, the man hated The Flintstones for ripping off The Honeymooners.

When Tina was 11, she got acquainted with Seventy Years of Great Film Comedians – she read it for the sake of making a school project about comedy. As a child, Fey had an icon - Catherine O'Hara.

When it comes to Fey's education, she studied at Cardington-Stonehurst Elementary School and Beverly Hills Middle School in Upper Darby. Later she entered Upper Darby High School. There she had perfect marks, attended choir and drama classes, played tennis and was a co-editor of the school's newspaper, The Acorn.

Having graduated, Tina became the University of Virginia's student. She got a Bachelor of Arts degree in drama in 1992. To earn a living, Fey worked as a receptionist during the day at the YMCA in Evanston, Illinois, and took classes at the Second City at night.

In 1997, while working on The Second City, Fey was asked by writer Adam McKay to elaborate several scenarios for the Saturday Night Live (SNL). The projects were highly estimated, and Fey started working as a writer for the SNL – its owner Lorne Michaels liked her. As a result, Tina left for New York. Her first scenario was used in the episode with Chris Farley. She kept writing, and also contributed to one of ABC's morning talk show The View. She co-wrote the Sully and Denise sketches with Rachel Dratch.

Besides writing, Fey has also starred on the show – so, in 1998, she was an extra. Having watched herself in recording, the woman decided to go on a diet. When she lost weight, she became more interested in appearing on stage. In 1999 Fey became SNL's first female head writer when the former one – McKay left the position.

In 2000 Tina starred on the show again – alongside Jimmy Fallon.

Four years later, Tina's colleague Fallon left the show, and the woman started working alongside Amy Poehler. Their duo was also accepted by the public.

The 2005-2006 season was the last for Tina Fey – she left the show for the sake of developing 30 Rock for Broadway Video. Totally, Fey had hosted 117 episodes. She was substituted with Seth Meyers. Fey was named a savior of the show – according to the critics, she «salvaged 'Update' from a decade-long losing streak,» and «slapped SNL out of its late-nineties coma.»

In 2013-2019 Fey returned to the SNL, her first interviews were with Katie Couric and David Letterman. Some of the most memorable her episodes were the ones where she reprised the 2008 vice-presidential hopeful Sarah Palin.

Fey's story with the 30 Rock began in 2002 when she suggested a pilot episode for a situation comedy about a cable news network to NBC – the channel rejected it. The episode was changed and resembled the SNL style a little. As a result, she was signed to NBC in May 2003. In October 2006, the pilot was shown on NBC as 30 Rock. Although the episode generally received favorable reviews, it finished third in its timeslot.

The woman got back to working on 30 Rock in the 2011-2012 season. However, she was pregnant by the second child, and the show's premiere was postponed until midseason.

In 2012 Fey began working on the television comedy Unbreakable Kimmy Schmidt with fellow 30 Rock-alumnus Robert Carlock. Ellie Kemper was a protagonist moving to New York. Besides her, Jane Krakowski, Carol Kane, and Tituss Burgess acted there. Remarkably, the comedy was initially produced for NBC but was eventually sold to Netflix. It premiered on March 6, 2015, and got positive reviews.

In the second season, comedy's fans could see Fey among its actors. She played Kimmy's psychiatrist Andrea Bayden, a role she reprised for season three. The series has got numerous awards and nominations.

Also, Fey portrayed Marcia Clark - an American prosecutor, author, and TV correspondent who served as the lead prosecutor – in the sitcom.

2002 was marked by Tina's appearance in the surreal comedy Martin & Orloff. Two years later, Fey was invited to the teen comedy Mean Girls. She co-worked there alongside Tim Meadows, Ana Gasteyer, and Amy Poehler.

In her admissions, Fey once said she wanted to write and direct movies. In 2006 she was lucky to work on the script for the Paramount Pictures. The next year, Fey starred in the top animated comedy movie Aqua Teen Hunger Force Colon Movie Film for Theaters as the Aqua Teens' mother, a giant burrito.

Alongside Amy Poehler, Tina acted in the comedy Baby Mama (2008) directed by Michael McCullers. The movie got various reviews but, in general, was successful. Especially highly, the critics evaluated Tina's acting. The movie grossed over $64 million at the box office.

In 2008, the celebrity gave her voice to the Japanese animated movie Ponyo. The next time Fey appeared on TV was in 2010 when she starred in the comedy Date Night. The same year, Fey gave her voice to Roxanne Ritchi, a television reporter, in the DreamWorks animated movie Megamind. Remarkably, the movie's worldwide gross was evaluated at US$321 million and is thought to be the most commercially successful for Tina.

In 2013 the world could see Tina playing alongside Paul Rudd in the romantic comedy-drama movie Admission, based on the Jean Hanff Korelitz novel by the same name. One year later Fey acted in the comedy-drama This Is Where I Leave You, helmed by Date Night director Shawn Levy.

That time Fey also starred in the show «Inside Amy Schumer» (a sketch comedy television series created and hosted by Amy Schumer.)

In her career, Tina Fey has managed to appear at the Disney world. So, in 2014 it was announced Fey would be the narrator for the Disney Nature movie Monkey Kingdom. The picture was released on April 17, 2015. Shortly after she started co-working with Poehler again – they starred as protagonists in the comedy film Sisters.

In 2016 Fey took part in an «Into The Woods» audition but failed.

In 2017 the celebrity was invited to the «Stand Up» show.

In spring 2019 we could see Fey in the comedy film Wine Country on Netflix.

Tina Fey’s net worth is evaluated at $65 million.

Tina Fey married Jeff Richmond, an actor, director and composer in 2001. Tina and Jeff met at Chicago's Second City and they dated for seven years before getting married in a Greek Orthodox ceremony. The Sid Miller Dance Band played at their wedding reception, and the spouses now have two daughters together – Alice Zenobia (born on September 10, 2005) and Penelope Athena (born August 10, 2011).

Richmond got down on one knee while they were on vacation on Lake Michigan.

As for his biography, Jeff Richmond grew up in Portage County, Ohio and graduated from James A. Garfield High School in Garrettsville, where he won the John Philip Sousa award. He also played a big part in creating the Garrettsville Community Players. Staying in Ohio, Richmond attended Kent State University, where he co-authored a number of musicals.

Richmond worked with wife Tina Fey on Saturday Night Live, 30 Rock, and the film Baby Mama. Richmond left SNL in 2006 to produce and compose music for 30 Rock and even appeared as an extra on the show as the character Alfonso Disperioso. Richmond also composed the score to the film Baby Mama, which starred his wife, Tina Fey, opposite her Golden Globes co-star Amy Poehler.

When Richmond goes out to eat with his wife, he begs her to put on her glasses so that people recognize her and they get the all-star treatment.

Interestingly, Fey’s eldest daughter Alice Fey couldn’t get into «30 Rock.» It was revealed that she preferred «Parks and Rec.»

In an interview, Fey stated that she was 24 years old the first time she had sex.

Until 2009, fans had not known the cause of the scar seen on the left side of Fey's face. In an interview and later in her memoir, Bossypants, she admitted that a stranger «slashed» her in the face when she was in kindergarten, right behind her house.

It might be hard to believe, but Fey is linked with rapping. In 2012, Fey rapped as part of Childish Gambino's (aka Donald Glover's) mixtape «Royalty.» In addition, on the set of Mean Girls, Fey and Poehler trained actor Rajiv Surendra for his rap scene at the winter talent show.

Tina Fey has lots of fans due to her unique style of performing. So, her deadpan humor, «sardonic wit,» self-deprecating humor and delivery while hosting the show differ her from the colleagues.

When it comes to Fey's acting style, critics call her the hilarious, self-deprecating career woman.

Tina Fey is an active member of charitable organizations like «Autism Speaks» and «Mercy Corps.» She also supports the U.S organization «Love Our Children» which fights violence against children.

She was presented the Producers Guild of America Awards for Outstanding Comedy Series for her show '30 Rock' in 2008. This award is given to honor the visionaries who produce and execute motion picture and television product. In 2010, she won The Mark Twain Prize for American Humor awarded by the John F. Kennedy Center for the Performing Arts. It is America's foremost award for humor.

In 2019 the celebrity was invited to the Oscars 2019 Hostless Open. The event began with a performance from Queen and Adam Lambert, followed by a monologue-esque series of jokes from Tina Fey.