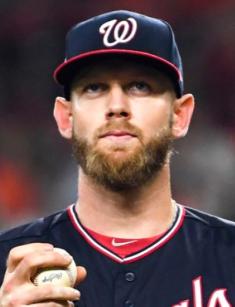 He is a professional baseball player. Stephen has fantastic skills, which are highly appreciated. The athlete always draws much attention and proves the coach's expectations.

His father worked as a real estate developer. His mother was a dietician. Stephen had a comforting childhood and a lovely family. Since childhood, he displayed interest in baseball. He spent much time to improve his abilities. His maternal grandmother spent with him much time and helped his training. Thus, she often played catch and worked on pitching with him. As a result, his granny became one of Stephen's biggest inspirations to become a pro baseball player.

During his amateur career, he struggled a lot. First of all, at high school, where he posted his first win-loss record. During his Senior Year, he played very impressively and attracted the attention of scouts. He set school records and was named the athlete of the Year in 2006.

Stephen dreamt of entering Stanford University, but unfortunately, he wasn't accepted. Even though he managed to enroll in the prestigious state university in San Diego, this was the right decision, as the baseball team of the university was coached by the legendary baseball player Tony Gwynn.

It is hard to believe, but the young man was poorly accepted in the university baseball team. Stephen was out of shape and overweight. His coach encouraged him to lose baseball. It was hard to adapt to a new coach as well as a university regime. Stephen moved from university dormitory five days after his arrival. As an athlete remembered, he wasn't a mature student, and the apartment was overloaded.

Despite all hardships, Stephen didn't quit baseball. He kept a strict regime trying to lose weight, become physically and mentally well prepared. On the field, he displayed an impressive skill. He was named o-Freshman of the Year, and by the end of his education was named top prospect athlete.

Stephen was included in the national team and took part in several championships, among them Olympic Games in 2008, where he gained a bronze medal.

His professional career began in 2009 when he signed a recording contract and made a debut on the minor league. One year later, he began playing on the major league. He set the number of records and took accolades.

Even though his career is highly successful, Stephen suffered a lot from injuries. In 2010 he was included in the disabled list after he inflamed his shoulder. Stephen had to undergo surgery and then devote moths to rehabilitation. 2012-2019 he played impressively and led the team to the victories. His stats in 2018 was 10-7 with a 3.74 ERA in 22 starts, in which he struck out 156 batters in 130.0 innings.

The teams highly appreciate the athlete. His annual salary reaches $16 million. In 2019 he signed the other beneficial contract. He will stay with the Nuts for seven years and receive $217 million.

In 2009 he began a professional career after signing the record-breaking contract. According to the four-year-contract, he would receive $15 million. He made his professional debut on the minor league, playing for the Dogs in Arizona. The player displayed impressive statistics. Since that time, the young athlete found himself in the center of attention, anticipation, and hype.

One year later, he made his debut on the major league. The reporters called his performance the most exciting debut in history. During his debut game, he overheld victory and set a new team streak out the record.

His pitching style represents five pitches. He prefers to throw a mix of his pitches, a four-seam fastball, two-seam fastball, a curveball, a changeup, and a "slider-cutter." Usually, he pays to attention what kind of hitters he faces and uses a more suitable and compelling pitch.

Stephen is a family man. He tied the knot in 2010 when he married his long-termed girlfriend, Rachel Lackey. The couple was in a relationship since college years. By 2019 the twosome has got two children, both daughters.

One of the most successful athletes has a good fortune. His net worth is $60 million. Meanwhile, his annual salary is about $18 million.