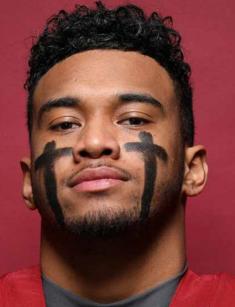 Tua Tagovailoa is a talented football player from the USA who currently performs as a quarterback for Alabama Crimson Tide. The 21-year-old sportsman, who belongs to the junior class, promises to become one of the most significant sports figures soon.

The future athlete was born in March 1998 in Ewa Beach, Hawaii. The boy had Samoan roots and grew up with three siblings: two sisters and a brother, Taulia. The latter devoted his life to football as well.

The father, Galu, began to train his son at the age of two. His methods were quite severe and even inappropriate: he could use physical punishment and made Tua throw a ball with his left hand, according to the sportsman’s ESPN interview. At the same time, the results were obviously impressive: at the age of eight, Tagovailoa could perform passes almost three times longer than his peers.

The young talent went to Saint Louis School. Many colleges would like to see him among their students – Tua’s high-school sports achievements did not go unnoticed. Eventually, he continued his education at the University of Alabama, winning a scholarship there.

As a student of the Saint Louis School, the teenager joined its football team and took the position of a quarterback. His stats were excellent: 8158 passing yards and 84 passing touchdowns, which broke a high-school record in the state. Thanks to Tua’s talent, the school won the HHSAA District 1 State Championship in 2016.

Following the brilliant debut, Tagovailoa continued to sparkle on the collegiate level. In 2017, the young man started participating in games. The next year, he replaced a more experienced teammate at the Playoff National Championship and helped gain the cherished victory despite the opponent’s huge advantage – 13 points. It was the turning point for the sportsman.

The first match in the new season was held against Louisville; it marked the full-fledged start for Tagovailoa. Overall, the year was full of victories and achievements; the QB received the Walter Camp Award and Maxwell Award.

The season 2019 opened with the triumph over Duke in Atlanta. However, the athlete had several minor injuries during matches before the greater one at the end of the season.

Today, the young man has no partner. However, he has expressed his wish to meet someone: apart from the obvious need for love and care, Tua has a more exotic reason. According to his interview with Sports Illustrated, a girlfriend could “go get stuff and bring it back”. The athlete’s diet and daily routine are quite strict, and the parents’ control feels overwhelming sometimes. A girlfriend could provide Tagovailoa with some junk food and make things fun.

The football industry might welcome another Tagovailoa soon. Tua’s cousin, Tuli, is an eighth-grade student now, has begun to receive offers from colleges: Maryland Terrapins will gladly accept the young athlete.

Tua has official accounts on Instagram and Twitter; he regularly provides the latest news from his life and posts pictures with his teammates, friends, and family. Once, the Alabama coach Brent Key shared a video with his mentee singing on Twitter: Tua has a fascinating voice in addition to his sports skills.

At the beginning of fall 2019, rumors had it Tagovailoa was a prime cut for Dolphins Jersey and The Cincinnati Bengals during the 2020 NFL draft.

Sudden news arrived in November 2019: the athlete was seriously injured: a dislocated right hip. He was carried away from the field and delivered to a hospital for surgery. Today, doctors’ expectations are mostly positive, although some experts believe that the quarterback’s condition will be improving slowly.