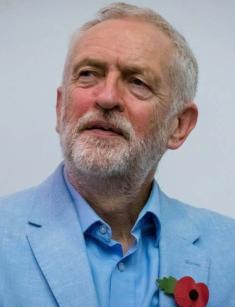 Jeremy Corbyn is a politician who serves as the leader of the Labour Party. He names himself a democratic socialist. The Labour Party, which he led, defeated in the 2019 U.K. general election.

Jeremy Corbyn is British, he was born in Chippenham, Wiltshire. Some people say that his accent sound more like an American than a British accent.

He has three brothers. His parents were Labour Party members and peace campaigners. Corbyn's family changed their place of residence when he was seven. They lived in Pave Lane in Shropshire and he spent his childhood there.

Jeremy got an education at Castle House School. When he was eleven years old, he started attending another school: Adams' Grammar School. He was a very active student. In 1966 Jeremy joined the Campaign for Nuclear Disarmament and later became one of its three vice-chairs and subsequently vice-president.

When Jeremy finished school, he worked as a reporter for a local newspaper. In 1969 and 1970, he traveled through Latin America. During his trip to Brazil, he participated in a student demonstration in São Paulo against the Brazilian military government. The Chilean elections of 1970 made an impression on a young activist.

Later, Corbyn became the local Labour Party's agent and organizer, and he was responsible for the 1979 general election campaign in Hornsey. Around this time, Jeremy joined the monthly political magazine London Labour Briefing. He was offered the position of a contributor.

In the July 1982 edition of the magazine Briefing, Corbyn became popular after opposing expulsions of the Trotskyist and entryist group Militant.

In 1982, Corbyn was elected as the Labour Party candidate for the constituency of Islington North. At the general election in 1983, he was elected Member of Parliament for the constituency and immediately joined the socialist Campaign Group. Later, he became a secretary of the group. During that time, Jeremy started writing a weekly column for the left-wing Morning Star newspaper.

In 1983, Corbyn supported the miners' strike. He also was a big supporter of Irish politics. He then worked for a resolution to the armed conflict. He took part in poll tax protests in 1990. Between 1997 and 2010, Corbyn voted most often against the party whip. In 2005, he was named as the second most rebellious Labour MP of all time when the party was in government.

Leadership of the Labour Party

In 2015 Jeremy Corbyn decided to stand as a candidate for party leader. He rapidly took the first positions among the candidates and was elected party leader in a landslide victory on 12 September 2015.

After being elected leader, Corbyn became Leader of the Official Opposition. There were reports of division between Corbyn and the Parliamentary Labour Party. Jeremy called his colleges for respect and dignity. According to a survey, 66% of those surveyed believed that the Labour party needed a new leader and only 23 percent believed that Corbyn would make a good Prime Minister while Theresa May had an approval rating of 55 percent. Corbyn was re-elected as Labour leader in September.

Corbyn was often compared to the U.S. Senator Bernie Sanders who has announced his candidacy for a Democratic primary race. The similarities between the two candidates have been long remarked upon.

Opinion polls during the first few months of his leadership gave Corbyn lower personal approval ratings than any previous Labour leader in the early stages of their leadership. The politician received criticism of his handling of the EU referendum and a string of Shadow Cabinet resignations. At the end of Theresa May's time as Prime Minister, she had a small lead over Corbyn in the best PM polling question.

The politician contributed to solving problems with the economy and taxation. He has campaigned against Private Finance Initiative schemes, supported a higher rate of income tax for the wealthiest in society.

Speaking of education questions, Corbyn spoke about restoring student maintenance grants. During the 2017 election, he had a policy of scrapping university tuition fees from 2018 restoring the maintenance grants abolished by the Conservatives in 2016 and funding a free national education service.

According to Fox News, Corbyn has been challenged on antisemitism concerning past associations and comments. However, the politician had many defenders that have cited his support for Jews against racism. Many famous people protected him with letters of support, published in the magazine the Guardian.

Speaking of the personal life of Jeremy Corbyn, he has been married three times. His first wife was Jane Chapman. They have lived together for five years but divorced. The biography of the politician revealed, that after divorce, Jeremy drove two friends to his flat because he wanted them to see new girlfriend Diane Abbott naked in his bed. Everybody was shocked, especially Diane. Jeremy made this to impress his Left-wing friends when he was a young Labour activist.

Claudia Bracchitta was his second wife. They married in 1987. Claudia gave birth to three sons in this marriage. They divorced in 1999 after two years of separation.

In 2012, the politician married Laura Álvarez. At the start, Laura and Jeremy had a long-distance relationship, because she lived in Mexico. Only in 2011, Laura moved to London.

Jeremy Corbyn doesn't like to talk about his religious beliefs while denying that he was an atheist. Jeremy names himself thrifty, saying that he uses a bicycle instead of a car. Speaking of his diet, he is a vegetarian.

In March 2019, Corbyn suffered from the assault that was made by a Brexit (British Exit) supporter.

In June 2019, David Mitchell, a British comedian, actor, writer, and television presenter, wrote a column about Jeremy Corbyn in the magazine The Guardian, in which he expressed his point of view of Corbyn's participation in the elections.

In 2019, Corbyn refused an invitation to attend a state banquet for Donald Trump, hosted by Queen Elizabeth II during the president's June visit to the UK.

The politician has an estimated net worth of £3 million.