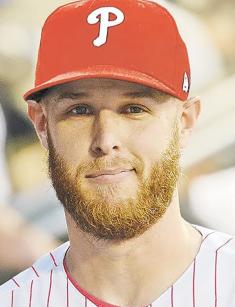 Zack Wheeler is a baseball player from the United States known for his performance in the New York Mets for six years. He has recently joined the Philadelphia Phillies as a free agent.

The would-be pitcher was born in Smyrna, Georgia, on May 30, 1990. The family was fond of sports. The mother, Elaine, used to play basketball and softball as a college student and continued to do so after graduation; the father, Barry, participated in men’s basketball competitions. The parents encouraged the kids to develop their physical abilities.

Zachary had two elder brothers, Jacob and Adam, who served as a good example for the boy. All the siblings were fond of baseball, but only Zach made it in the end: Jacob’s health condition prevented him from playing, and Adam could not make his career at the New York Yankees because of an injury.

When the future athlete was a teenager, the family moved to Dallas, Texas, looking for better opportunities for the children. Zach went to East Paulding High School and joined its baseball and basketball clubs. He did not show great results until 15, but things changed quickly. Wheeler became a coveted prize for sports managers with his 90-miles-per-hour fastball.

Zachary debuted in professional sports in 2009, when he turned 19. Initially, he participated in minor league matches to be accepted to the New York Mets in 2013.

The San Francisco Giants selected the young man during the MBL draft in 2009; he entered Chipola College according to the contract conditions. At the beginning of his career, Wheeler collaborated with the affiliated team Augusta Greenjackets and played for another fellow, the San Jose Giants, the next year.

Co-working with affiliates continued after the New York Mets bought the player; he was traded for Carlos Beltran. Zach mastered his skills with six starts in the St. Lucie Mets. At that period, he was one of the most promising young athletes: Baseball America magazine praised his progress.

Further on, Wheeler got transferred to the Binghamton Mets; his successful performance gave him the chance to participate in Eastern League All-Star Game in 2012. The club administration decided to promote Zach to the Buffalo Bisons in summer: he broke the record in the history of the club thanks to his 12-8 with a 3.26 ERA and struck out 148.

By the moment the sportsman stepped into the major league, the MLB.com placed him to the sixth and fourth positions in Top 100 Prospects and 4th on the RH Pitchers lists, correspondingly.

Wheeler’s first major-league match occurred on June 18, 2013; the Atlanta Braves was the opponent. The newbie did not let down his teammates; the score was 6 – 1. Thus, Zachary began his way with the New York Mets. It was not always easy: for example, a torn ulnar collateral ligament happened in 2015, and the athlete had to have a TJS for his elbow.

2016 was supposed to bring the come-back, but new health issues postponed this moment. In 2017, Wheeler appeared in front of the audience during the game with the Miami Marlins, which was lost. The return match in 2018 was more successful, though, and Zach’s overall stats improved.

The athlete’s personal life has been happy: an Instagram star and model Dominique Rizzo is going to become his wife. The couple is engaged but has no children. Dominique often shares pictures with Zack on her social network pages. In comparison, Wheeler’s Instagram account is private, and he has few posts on Twitter.

At the beginning of December 2019, fans learned the news about Wheeler’s departure from the New York Mets. The club will probably hire Seth Lugo or Robert Gsellman instead, but the details are unknown.

Many were interested in having the sportsman: the Twins offered the sportsman $100 million, and the Houston Astros, White Sox, Los Angeles Dodgers, Milwaukee Brewers, and St. Louis Cardinals could be his destinations. Eventually, Zachary chose the Philadelphia Phillies as a free agent.