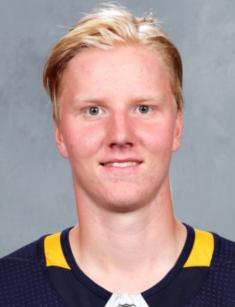 He is a Swedish hockey player with impressive agility and vivid talent. Even though Rasmus is only 19 years old, he achieved the number of accolades and plays like a mature and experienced athlete. All that made him the top prospect.

The Swedish hockey player was born in Trollhättan in 2000. He has got two younger siblings. Since childhood, he displayed an impressive talent and was passionate about playing hockey. As a kid he played not only hockey. He was good at soccer, Rasmus also was a pretty good BMX biker.

Thank his talent, impressive stats, and unforgettable style. The athlete has positive reviews and several admirers. He can play in any situation; he plays aggressively and can join the attack in a hurry. Rasmus has an accurate shot and established himself as an accomplished ice-hitter.

He began his career in 2016-2017 when he scored his first goal in the Swedish league. He was considered a top prospect. He signed the three-year contract with the Sabres.

When she was sixteen, Rasmus was invited to take part in international competitions. He became the youngest athlete who ever played for Sweden at the age of only sixteen years.

At the beginning of his career, he was close to being a forward. But then Rasmus realized that as a defender, he would be able to attack as well as to help his team. The young man confessed that he felt more responsible as a defenseman, and he liked it. By the way, he played in the center a lot until 13-14 years old. That experience helped him to become a conscious defenseman.

In 2018 he took part in the junior international championship and was the youngest athlete of the international competition. He became a vital part of the Swedish team and helped to lead the team to the silver medal. He was included in the top of defensemen after scoring the second-most points amongst tournament defencemen. During the medal ceremony, he and several athletes from the Swedish team removed their silver medals after receiving them. This cocky conduct cost them a suspension from the next junior championship in 2019.

In 2018 he also participated in the Winter Olympic Games. Representing Sweden, he became the youngest athlete of the tournament.

The young man gained wide popularity. He is active on Instagram, where he gathered more than 100K followers. He is not married, as well as not engaged. Rasmus hasn’t got children.

It is known whether the young hockey player is dating now. He is a handsome young man, but all his attention is focused on the game. His primary interest is hockey, as the athlete confessed during one of the interviews: “I give 110 percent every day and try to be better every day. I just love the game, and I can’t think about something else than hockey,”