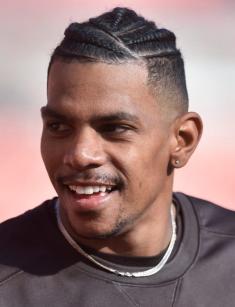 Terrelle Pryor is a famous football player. Currently, he is a free agent. He has made a successful sports career: from the tough childhood to the big fame in the field.

Terrelle grew up in the tiny town of Jeannette. Most of the time he lived in motels with his mother, brother, and sister. He said that when he was a kid, he had to wear the same clothes day after day. The city was known as The Glass City because there were several glass factories in town. Jeannette Specialty Glass factory was owned by Pryor's surrogate father, Teddy Sarniak, who died in 2012. Teddy passed just six days before Pryor's biological father Craig died. After these losses, the kids were raised by his mother. She often had three or four jobs at a time to earn money. At times, when they were homeless, they would visit their Grandma Marlene's house along with other members of their extended family.

Sometime later, the boy was noticed by some prominent businessmen. He recognized the enormous talent in Terrelle and offered his help to raise him. According to the player, he taught him to help other people.

Terrelle completed the Jeannette High School and got an education at the Ohio State University. His brother Isaiah Pryor is also a popular football player.

At high school, Pryor showed fantastic skills in basketball and football. Many people came from all over Westmoreland County to watch him play.

He became the first Pennsylvania player to pass and rush for more than 4,000 yards, and led Jeannette to a state championship as a senior.

The sportsman was named the No. 1-ranked quarterback. After finishing high school, his college career has started. Terrelle moved to Ohio State in 2008.

During that time, he had a scandal connected with the autographing memorabilia for a local booster. It prevented him from entering the Ohio State's campus. Luckily, it didn't damage his relationship with Tressel, the man who greatly helped him in life. The sportsman said he loved him like a father.

The career of the athlete began after he signed a contract with the Oakland Raiders in 2011 in the third round of the 2011 Supplemental Draft. In 2013, he went 3-6 with the Raiders, earning three of their four victories.

Later, in April, 2014, the sportsman was traded to the Seattle Seahawks. He played in the preseason but was released during the final roster cuts in August. After his release from the Seahawks, Terelle had played for several teams: the Cincinnati Bengals, Philadelphia Eagles, New York Giants, and Washington Redskins. But he did not sign a contract with any team.

In 2015, the football player signed a one-year contract with the Kansas City Chiefs. He was released the same year. In June, 2015, Terrelle joined the Cleveland Browns.

In 2016, Bengals cornerback Adam Jones compared Terrelle to garbage can, which caused many controversies. According to ESPN, it happened after a 23-10 win over Cleveland. Like a good public speaker, Adam decided to use visual cues. Jones shook a plastic garbage can near his looker to indicate that Pryor was "garbage," looking inside the bin with the question: "Hey, you in there?"

In March, 2017, Pryor signed a one-year contract with the Washington Redskins. He made a debut in the season-opening game against the Philadelphia Eagles. He was placed on injured reserve in November, 2017. He had to have ankle surgery after getting an injury on Week 2.

The sportsman remains one of the greatest football players with high stats. His current team is the Jacksonville Jaguars, with which he signed a contract in May, 2019. In August he was placed on injured reserve and was released three days later. At present, he is a free agent.

The sportsman has been involved in several relationships. He was dating Chania Ray in 2014. That year his girlfriend gave birth to his son Terrelle Stephen Pryor II. He often posted pictures of his girlfriend and the kid on his Instagram. As the sportsman doesn't speak openly about his private life, it difficult to say who his girlfriend is. He is also known to be in a relationship with Heaven Lei Bobo.

In the latest news, Terrelle Pryor was spoken to be attacked by Shalaya Briston, possibly his girlfriend. She stabbed Pryor in the chest during a fight at their Pittsburgh apartment. Briston and her friends drove Pryor to the hospital, where he underwent emergency surgery after. The sportsman was later arrested and charged with assault. Shalaya faced two felony criminal charges: aggravated assault and attempted homicide.

The net worth of the football player amounts to $8 million. He gets earnings from a professional career. The sportsman is happy to be able to live the life he always dreamed about and to help his family financially. He wants to fulfill a promise he made to his mom many years ago in Jeannette: to get her a house right behind his.