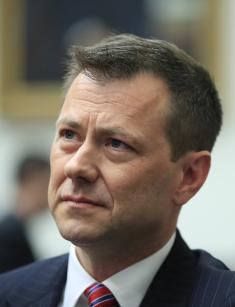 He is a former agent of the bureau who made an outstanding career leading the majority of investigations and was one of those who made the critical decisions in the bureau. However, his career was broken at its' peak. After his text messages were published, he found himself in the center of the political scandal. As a result, the agent lost his position in the bureau for his criticism of the president.

During his childhood, Peter traveled a lot. His father was an American Lieutenant Colonel who served in the Corps of Engineers. The Strzoks lived in Iran, did several tours in Vietnam and Saudi Arabia. Nevertheless, the young man graduated from high school and got a bachelor's and master's degrees in the USA.

After studying, he served in the American army and then was accepted in the FBI, where he worked as a research specialist.

He devoted 22 years of his life to serving in the bureau and took part in the most significant political investigations. He led teams of investigators concerning both national and international political agendas. Thanks to his spotless reputation and productive work, he holds the second-highest position in his division.

In 2017 he began working on Mueller's investigation aiming to observe any links the American presidents and Russia's government. Then he was removed from this case when his text messages came under scrutiny. Peter found himself in the spotlight, as his messages were widely discussed. According to those messages, Peter criticized the president of the USA. He was suspected in the conspiracy to undermine Trump's presidency.

That news burnt a series of scandalous discussions and a number of controversial reactions.

Thus, the director of the FBI led this investigation and decided on Strzok's removal. In February 2018, the influential journal made an in-depth review of Peter's text messages. The reporters analyzed 7000 words or 384 pages and concluded that those messages hadn't any signs of a conspiracy.

However, the deputy director of the bureau found those messages anti-Trump. He fired Peter on August 10 in 2010. Those messages were widely used by the republicans as a provement of the aggressive way of the investigation against the president. Indeed, those messages became a weapon in the Republicans’ hands. They proved bias and lack of objectivity of the FBI’s work.

Peter himself said that he was fired because of the political pressure from Trump. Peter said that he had always followed working ethics, and his personal beliefs didn't jeopardize any investigation.

He made a good fortune for 22 years of service for the FBI. However, Peter spent much money on legal services. His friends launched a campaign on Peter's behalf. They founded $449000 out of needed $500000. He is a married man. There is no information about his children.