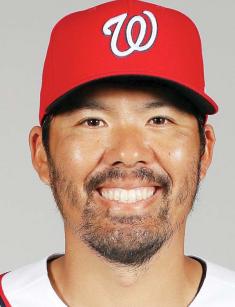 The Wailuku native, Kurt Suzuki started a baseball career in MLB in 2007, as a rookie of Oakland Athletics. He plays at a catcher position. Over the years, he played for Athletics, Nationals, Twins, and Braves. As of 2019 he was a Washington Nationals’ catcher. Become the 2014 All-Star participant, Kurt was inducted in Cal State Fullerton Titans Hall of Fame three years later. Suzuki has a wife and three children from her. His net worth is roughly estimated at $25 million, including all of his properties and career earnings.

The birthplace of Kurt was Wailuku, a census-designated place in and the county seat of Maui County, Hawaii, US. He was born to his dad, Warren, and mom, Kathleen, on October 4, 1983. Although Kurt has a unique appearance, his ethnicity can be attributed to the American. The boy grew up interested in baseball and played for his school team. He was hitting /328 as a senior at Baldwin. That’s why Suzuki had to walk on to the education program at CSU Fullerton.

In 2003 Kurtis appeared in NCAA Division I Baseball Tournament, but the Titans lost the Series. A year later, Wailuku native became the Titans’ key player, who helped lead the team to their fourth national championship, driving in the winning run with an RBI single in a 3-2 victory over Texas in the College World Series. The junior set a CWS record for most chances handled in a career without an error. Soon Suzuki won the Johnny Bench Award as college baseball's best catcher.

In 2004 Kurt got a chance to enter the MLB. He was drafted in the second round by the Oakland Athletics. However, the heads of franchise didn’t have particular hopes for the young catcher and sent him to its A-Level satellite. Kurt showed rather a good playing and made the only error in almost 50 season games. In 2005 he spent his first whole professional season in the Californian Stockton Ports. Gone through two other Minor league’s teams, Suzuki was prompted to MLB in June 2007.

The Athletics traded their reserve catcher in June 2007, and Kurtis Suzuki got into the MLB roster. Three days later he debuted in a losing game against Astros. In a month, the Wailuku native became the Athletics’ main catcher. In a debut season, Kurtis appeared in 68 games, scoring 213 At Bats, 27 Runs, 53 Hits, and 39 RBI with .249 BA.

Suzuki became the important player for Oakland in the next three years, setting several franchises’ records. In 2009 Kurt was their leader in total bases, hits, and doubles. In July 2010 Kurt signed a four-year extension on $16.25 million. By August 2012, Suzuki led all qualified American League catchers in fielding percentage (.996), caught stealing (23) and caught-stealing percentage (38.3%).

He was a .254 (643-for-2530) career hitter with 134 doubles, 57 home runs, 302 RBI and a .689 OPS in 703 games spanning six seasons, when the Washington Nationals acquired him from the Athletics in exchange for minor-league catcher David Freitas on August 3, 2012. He spent two incomplete seasons in Washington and returned to his former teammates on August 22, 2013. Suzuki played 94 combined games for Oakland Athletics and Washington Nationals that season, hitting .232 (66-for-285) with 13 doubles, five home runs, and 32 RBI.

In December 2013, he joined the Minnesota Twins. And in following summer, Suzuki was named to MLB All-Star roster and finished 2014 season with career-high hit .288. Those achievements allowed Kurtis to hope for the extension with Twins, which he signed in July 2014. Suzuki didn’t lower the bar and showed the outstanding stats in all three seasons for Twins. However, the small injury didn’t allow him to finish 2016 season.

Soon he moved to Atlanta Braves. In January 2017 the sides signed a one-year deal, which was expended in September thanks to catcher’s good playing and stats. After spending the two years with the division-rival Braves, the veteran catcher was looking forward to reuniting with Ryan Zimmerman and Stephen Strasburg, who was also part of Washington's memorable 98-win season in 2012.

When Nationals general manager Mike Rizzo made Kurt feel like a priority, the player jumped at the opportunity to rejoin a team that celebrated its first division title with his presence in 2012. The Nationals officially announced Suzuki's two-year $10 million contract on November 20, 2018. The Suzuki’s second stint to Nationals became the pick point of his career, as in October 2019, he became the championship winner.

After the Nationals staged a late comeback against the Dodgers’ bullpen to pull out a 7-3 victory in 10 innings in NLDS Game 5, they defeated the Astros in the final seven games. As any player, Kurt had a “playoff beard” in final games and that was very unique appearance for Hawaii native. After a victorious final his bobblehead was also awarded with the rare attribute, and became very popular for orders on eBay.

In November Kurt began trending in the US after a video of President Donald Trump, giving the Nationals catcher a hug from behind—striking a pose reminiscent of the famous "I'm the king of the world!" scene from 1997's Titanic—was shared on social media.

Suzuki and his teammates were invited to visit the White House to celebrate their victory. It was customary for the president to invite championship-winning sports teams to the White House. Such invitations had taken on a political dimension under the Trump administration, however, with many teams and star players declining the honor.

That year, as in previous years, some players from the winning team declined the president's invitation in protest. In his speech at the White House praising the Nationals for their performance and sportsmanship, Trump mentioned an "amazing three-run homer by Kurt Suzuki." He then called the 36-year-old player to the podium.

But Suzuki had no problem accepting Trump's invitation and showing appreciation for the president. Suzuki appeared on cue, donning a red ball cap emblazoned with Trump's motto, "Make America Great Again"—an article of clothing emblematic of Trump's supporters since his 2016 campaign—and raised both of his hands triumphantly. The president appeared surprised by Suzuki's show of support and hugged him from behind.

Suzuki has a large happy family. He is married to Renee Suzuki, his longtime girlfriend. The couple met in college and now had three children together. In 2011 they welcomed a daughter, Malia. In 2013 and 2016 Renee gave birth to their sons, Kai Noah and Elijah.

Apart from family matters, Kurt and Renee spend a lot of time speaking out on behalf of kidney disease research. In 2012 the couple opened the Kurt Suzuki Family Foundation, which was seeking to raise awareness and funds for kidney disease research. The spouses had personal connections to the medical affliction: Kurt’s father and Renee’s sister had both battled issues related to their kidneys in the past.

In 2007 Warren was diagnosed with stage four kidney cancer, but later, he got treatment and went into remission. That story inspired Kurt and Renee to raise funds for medical treatments and to found the non-profit organization.