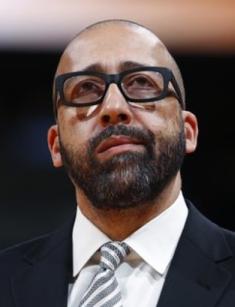 David Fizdale is a sportsman who had demonstrated excellent skills during his early college years and succeeded in his career as a coach. The sportsman had coached several teams before he was fired from the New York Knicks in 2019. Fizdale's wife is named to be one of the most attractive wives among sportsmen's girlfriends. David is respected by many players for his professionalism and charisma.

The sportsman was born in Los Angeles, California. David Fizdale is African-American; his mother is of Caucasian heritage.

Fiazdale's family members, including his grandfather, became the victims of armed violence in 1993. David received a message and when he called home, his sister told him that his grandfather Robert had been shot several times and was feeling bad. Robert was followed on the way home by a few young men after he made a withdrawal at the bank. He was shot on his front porch after he refused to let the bandits in the house where Hamilton’s daughter, husband and grandchildren were inside.

In February, when Fizdale drove back to school from the L.A. Hospital, his grandfather had died, shortly after he had visited him. Robert’s nephew later said that it was really tough for David to accept what had happened. His grandfather was the main male figure in his life, who always gave him advice and supported him in everything.

Fizdale got an education at Fremont High School. During his studies, he performed in the school's basketball team in a position of a point guard. After that, he entered college in San Diego.

David Fizdale started his career in 2003. Firstly he worked as an assistant coach for the Golden State Warriors. After that, he coached Atlanta Hawks and Miami Heat until 2016. In 2013, David also coached a squad selected by Shaquille O'Neal during the NBA All-Star Weekend.

In May 2016, David started to coach the Memphis Grizzlies. By 2017, he had reached results and led the team to a record. The Grizzlies reached the Western Conference playoffs. During the 2017–2018 season, the team had eight consecutive losses. David Fizdale left his team as a coach in November 2017.

In May 2018, he began to train the New York Knicks. The team lost their first matchup of the season in November. The Knicks were losing to the Sixers when they went on a run in the fourth to win the game. Sixers star Ben Simmons had demonstrated his professional skills and scored high points in the win, including the first three-pointer of his NBA career. Before the game between the two teams, Knicks head coach David Fizdale discussed how his team would try to defend the player because it was clear the Simmons is very strong.

In April 2019, David revealed on ESPN radio that the Knicks offered to buyout the player DeAndre Jordan, but he wanted to stay in the Big Apple.

After a year of coaching, David was fired by the Knicks in December 2019.

David Fizdale was a man beloved by the NBA famous sportsmen, including Dwyane Wade and LeBron James. Many players admitted that the well-liked Knicks leader had the ability to attract those top names to Manhattan in free agency. However, that never happened, and Fizdale had managed consecutive questionably-constructed rosters since his arrival.

The number of games, during which David coached the Knicks, is 104 games in two seasons. The overall coaching record of the coach is 71-134, including 101 games with the team Memphis Grizzlies.

David Fizdale's wife Natasha Sen is one of the most attractive and well-known wives of the NBA. They have together from 2014. Natasha is very popular and has over 100,000 followers on her Instagram account. She runs her personal business which is called The Creativity Penny. Fizdale’s wife hadn’t just got the attention of NBA fans, she had even attracted the attention of professional sports analysts such as Stephen A. Smith. During a segment on television, Smith was discussing the New York Knicks and his love for the Knicks coach until he stopped abruptly to then speak about his wife Natasha and her beauty.

Fizdale has one son from a prior relationship with Gabrielle Union. They are known to have good relationships. David and Natasha were spotted in Miami having dinner with Dwyane Wade and Gabrielle Union. When Fizdale was fired from his job with the Grizzlies, Wade sent out supportive messages on his Twitter. Smith said that he respects David for his personality and charm, which are probably the best skills for coaching, according to him. David Fizdale himself is not active on social media. Fizdale is also described as the coach with tremendous basketball knowledge. Many people noted that he has almost a photographic mind: he can recall plays and situations from days before without looking at film. Many sportsmen think it’s a big gift for the coach.

The sportsman has an estimated net worth of around $20 million. As a basketball coach, his earnings are around $51,000. When he signed a four-year contract with Grizzlies in 2016 as head coach he got $10,2 million. His salary was about $2 million in his first two seasons and $3 million in his third year.