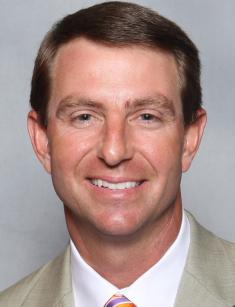 Dabo Swinney is a notable figure in the American football industry: he is a head coach at Clemson University who brought the team to its national triumph in 2016 and 2018. The man’s remarkable achievements made him the highest-paid coach on the collegiate level in spring 2019. However, Swinney had to overcome many ordeals before his coaching talents were recognized.

William was born in November 1969 in Birmingham, Alabama. The boy inherited his father’s love of football and the mother’s strong spirit. Ervil Swinney owned a fuel station; he instilled the interest of sports in the boy, and they often watched TV matches, supporting the University of Alabama team. The mother, Carol McGraw, was bravely struggling with polio for most of her childhood and teenage years and recovered against doctors’ prognosis.

Will was the youngest child in the family. The nickname “Dabo” came from his older brother, Tripp, who was too small to pronounce the words “that boy” correctly so that it sounded like “dabo”.

When Swinney graduated from school, the parents divorced because of the father’s alcoholism and violent behavior. Carol and William spent about three years cooped up in small houses before they found enough money to ceased living together.

Dabo was an optimist despite any challenges. In 1989, he enrolled at the University of Alabama and joined its football team as a wide receiver; the athlete participated in the National Championship three years later and earned several prestigious prizes individually.

As long as Swinney earned his Master’s degree, he began to develop his career in the coaching administration of the Crimson Tide. In 1995-2001, he worked as an assistant for receivers. That period was not lucky for the team; following many failures, Swinney was even fired.

Nevertheless, Dabo was not one of those who lamented over unsuccessful moments and gave up immediately. In 2003, he started collaborating with the Tigers as a recruiter. 2003-2008 were full of hard work. Swinney’s choices were often beneficial for the team, and Rivals.com even named him one of the best coordinators in the country in 2007.

October 2008 was special for Swinney: he became the interim head football coach. The full-fledged activities began the next year; the Tigers reached number 24 in the national rating, which was pretty good for the team then.

Things were speeding up: in 2010-2014, the Tigers were no lower than number 15. They improved the defense system significantly and laid the foundation for the further progress: Swinney did not rush and kept going on steadily. Chains of victories were frequent.

2015 brought the turning point: the Tigers earned the long-awaited victory at the national championship. This is when the quarterback Deshaun Watson and other agents found by Swinney showed their abilities to the fullest. Another triumph happened in 2018; some experts believed the Tigers made the best college football team.

Dabo’s personal life has been happy. He married his old girlfriend, a former Kathleen Bassett, in 1994; the couple got three sons together. Two of the boys followed in their father’s footsteps and devoted their lives to football, becoming wide receivers at Clemson University.

The spouses created Dabo’s All In Team foundation to help people across South California; the organization deals with health issues and education.

In 2018, Manie Robinson and Tajh Boyd presented the book Top of the Hill: Dabo Swinney and Clemson’s Rise to College Football Greatness.

Today, Swinney continues to work as the Alabama coach; he also takes part in press conferences. 2019 brought the sixth ACC Championship victory for his team.