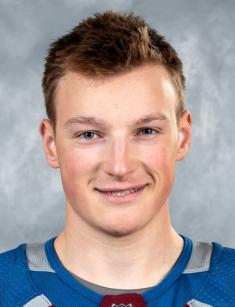 Cale Douglas Makar is a defenceman in ice hockey from Canada, and he currently plays with the Colorado Avalanche team. By the way, Cale is often compared to a great Swedish hockey player Erik Karlsson.

Cale Makar was born in Canada in 1998 to Laura and Gary Makar. In Cale’s family, there are other sportsmen: his brother Taylor and cousin Mark Logan also play hockey.

His hockey debut Cale made with the Crowchild Blackhawks. Then he played with the NWCAA Bruins, Calgary Flames, and NWCAA Stampeders. During the WHL Bantam Draft in 2013, Makar was drafted by the WHL’s Medicine Hat Tigers.

In 2014–2015, he was with the Calgary Flames again, and after that season, Cale was named the Most Valuable Player. Next season, 2015–2016, Makar turned out to be a standout defenceman in the Brooks Bandits, and that year was really productive for him. Later, he was chosen fourth overall by the team called Colorado Avalanche.

During his college time, Cale joined the UMass Minuteman program in 2017–2018. His first goal was made on October 27, 2017, during a game against Merrimack College. For the next season, despite the interest of the Colorado Avalanche, Makar continued working with the UMass. That year, he was called the Hockey East Player of the Year and scored his famous end-to-end goal.

Speaking about his college stats, Makar had the best number of goals (24) with the Brooks Bandits in 2016–2017, and 51 assists also with that team.

In April 2019, the Avalanche eventually got Cale as their player, and they signed a contract, for which he received a salary of $700,000. Makar turned out to be the first defenseman who scored a playoff goal during his NHL debut that year.

The 2019–2020 season started well: Cale had his first goal during the winning game against the Golden Knights. Then the Avalanche defeated the Winnipeg Jets, but at the game with the Boston Bruins in December, Makar had an upper-body injury, so he was out of the game for a while.

In 2015 and 2016, Makar played as a part of the Team Canada West at the annual tournament WJAC. In 2015, he helped his team to receive a gold medal. Cale also took part in the World Junior Ice Hockey Championships in 2018 and won gold again. After that, he refused to join the Canadian senior team that would go to the Winter Olympics in 2018 because Makar wanted to focus on his local career.

For 2020, Cale has a net worth of approximately $500,000. Besides hockey itself, Makar might receive money from sells of his clothing line. The Colorado Avalanche has its own online store, where you can find not only Cale’s jersey but also a toy like Matt Duchene Bobblehead.

Speaking about Cale’s love life, it seems that a young man is very focused on his career. He was never seen with any girlfriend, so we will wait and see.

Makar cares about charity. For instance, in October last year, he had a meeting with the fans in the Bender’s Bar and Grill in Colorado. The proceeds from his autographs went to St. Jude's Children's Hospital.

Another sweet story about Cale happened in September 2019 after he signed a contract with the Avalanche for three years. Most athletes would buy a new apartment or a car after receiving their big salaries but not Cale. He told in one of the interviews that his first large purchase for the recent times was a Slurpee. Not a car, not a house, but a drink! Makar shared that he did not usually afford that sweet to himself.

Cale’s season with the Brooks Bandits turned out to be very successful, and he received various awards, including AJHL and CJHL Rookie of the Year Awards and the Western Canada Cup Top Defenceman Award. In 2018, he received his only one, for now, an international award, WJC All-Tournament Team Award.