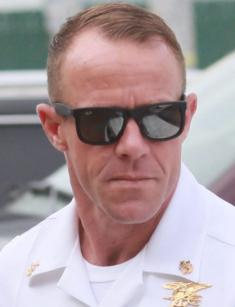 Eddie Gallagher’s name came to knowledge in fall 2018 due to the accusations of series war crimes. The matter was so pressing that even Donald Trump himself had to intervene.

There is almost no information about Gallagher’s early years, school, or relatives. Such secrecy is understandable, considering his career. Eddie’s father was Lieutenant Colonel, and his uncles were also the members of the US Army; both grandfathers participated in World War II.

According to some sources, Edward turned 39 in 2019, which means he was born in 1980. Whether this data is true and what was his birthplace remains secret. The man has a brother, Sean.

Young Gallagher graduated from high school in 1999 and went to a boot camp; further on, he joined a medical school working with the Navy forces. Kosovo was the first destination of the newfound soldier; he also took part in the Iraq War and the War in Afghanistan as a sniper and bomb technician.

The man received many awards during his services, such as the Sailor of the Year, Sailor of the Quarter, and two Bronze Stars with V for Valor. Overall, he devoted about 19 years to protecting America.

The public outcry occurred in September 2018 when Gallagher was at Camp Pendleton: he was accused of multiple crimes, including attempted killing, obstruction of justice, threat, and others. He pled not guilty of all the charges.

According to prosecution, the officer was responsible for violence and brutality, such as shooting at peaceful civilians and stabbing an Iraqi teenager, who was an ISIS member.

The case is associated with many controversial issues. The formal work was not started for more than a year after the first reports; as a result, witnesses’ claims were the primary instrument. However, some subordinates probably hated Gallagher’s style of command and painted him black in their interviews.

Eventually, Gallagher was accounted guilty for the photo with a corpse; other charges were dismissed. By that moment, the officer had already spent more than four months (the maximum punishment) in prison, so he was released.

Another issue remained unresolved: Gallagher’s demotion. Following a chain of lengthy procedures and Trump’s intervention, the decision was reversed, and Edward retired in November 2019.

Eddie Gallagher met his future wife, Andrea, when they were teenagers; the young people belonged to the same company of friends.

The couple separated at some point, but their story recommenced in 2006; the lovers married on May 27, 2007. Today, the couple has three kids: Treven, Ava, and Ryan.

Eddie and Andrea have not hidden their personal life: they shared many pictures together or with their kids. When her husband was accused, the woman became a passionate supporter of Gallagher and created an Instagram page to keep people informed about how things were going and posted photo and video content.

In summer 2019, the writer Acie Cargill presented the book The Trial of Eddie Gallagher, Navy SEAL, analyzing the conflict, accusers’ and attorney’s arguments.