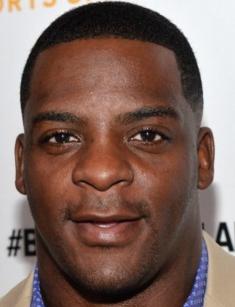 Clinton Portis is a retired American football player who performed in the NFL. He is known for his success in the Washington Redskins, and the club included him in the list of its greatest members. The sportsman’s name has recently resurfaced due to a fraud scandal.

The future football celebrity was born on September 1, 1981, in Laurel, Mississippi. The boy had two elder brothers, and the mother had to raise them alone. She worked hard all day, and one of the neglected kids drifted into crime and substances; he is in jail now.

Soon, Rhonnel started dating Tyrone Pearson and moved to Florida. The changes were difficult for the teenager, but he found a common language with the new family in the end.

Portis went to Gainesville High School and played basketball and football. When the young man began to slide down to drugs, just like his brother, a school teacher noticed that and helped the student. Clinton focused on sports and took the position of a running back; his accomplishments were remarkable.

After graduation, the young talent enrolled at the University of Miami and joined its team, the Hurricanes. The newbie was selected the starting RB and could boast the recording five 100-yard performances in his first year.

Although the second year was less successful, Portis’s third collegiate season brought a splendid victory at the National Championship; he had 1200 yds and ten touchdowns altogether.

The brilliant stats made Portis a desirable member for many teams. In 2002, the Denver Broncos drafted him and gave him the opportunity to play as a running back.

Clinton made a terrifying part of the team’s offensive strategy. He was getting more and more confident with each game, but the Broncos’ overall performance was not good at that period. The attacker was awarded the NFL’s Offensive Rookie of the Year.

Experts were not much enthusiastic about the athlete’s contract with the Washington Redskins in 2003: they believed he would not fit in their schemes.

Indeed, Clinton had to adjust to the new style, but it did not go in vain. Fans loved not only his achievements but also unusual appearances: for instance, he was wearing a world heavyweight belt after the triumph over the Kansas City Chiefs in 2003. Portis’s alter egos were also memorable: Southeast Jerome, Reverend Gonna Change, Dolla Bill, and so on.

The sportsman’s results were mixed: some seasons were excellent and gave new records, as it happened in 2006: Portis broke the club’s record and got 1516 yds. In comparison, he participated only in five matches in 2010 because of injuries.

There is little information about the man’s personal life; whether he has a wife or girlfriend remains secret.

However, Portis has shared some photos with his sons, Camdin and Chaz. Overall, he has four children; their mother’s name is unknown.

Clinton is an easy-going person and gladly talks to his fans; he gives them autographs and takes pictures together. People often share them on Instagram, Twitter, and other social networks.

The sportsman retired in summer 2012; he appeared in Redskins’s list of best members. Two years later, he was included in the UM Sports Hall of Fame. As long as the man finished his career, he revealed he had had ten concussions throughout his professional career.

Further on, Portis’s financial situation was full of problems. He hoped to invest his career earnings beneficially but found himself a victim of agents’ scheme soon and had to sell his homes. This money was not enough, though, for child support payments and taxes; the former football star was going to kill to get more currency.

In 2015, Portis announced his bankruptcy; he lived in a small apartment in Northern Virginia. The ordeals were not over. In December 2019, the news about the charges against Clinton came up: he was accused of a $3 million fraud involving NFL health payments along with other players. The falsified claims allegedly happened in 2017-2018.

The athlete’s net worth used to be $43 million; today, he owes approximately $5 million.