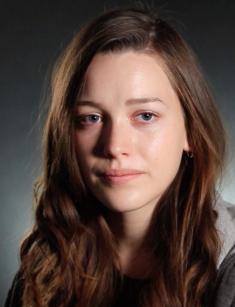 She is a promising American actress who got prominence starring in the Netflix series. Thanks to her perfect portraying different characters, Victoria established herself as one of the most talented rising stars in Hollywood.

Her hometown is Philadelphia, where she spent her childhood. Victoria attended the school of drama, where she honed her acting skills. In 2017 she received her bachelor’s degree in Fine Arts. There is little information about her parents. However, she is very with her family.

Since 2014 the actress appears on the small and big screens. Her first roles were episodical. She played her debut role in the short movie “Sole” and then starred in “Eden”. Four years later, she began working on projects which brought her fame and recognition.

Finally, she received her future breakthrough role in 2018 - she appeared in the TV series “The Haunting of Hill House.” The actress remembered right before receiving that role she burned through the last of her post-college cash. Even though she had a sincere wish to give the whole actress thing a try, Victoria didn’t receive breakthrough roles. The actress began considering the all-day job. In that TV series, she portrayed the critical character who fought with demons from her early years. She displayed devastating performance. Violet McGraw played the younger version of her role. The cast of the series also includes Oliver Jackson-Cohen.

Soon she reunited the cast of the new TV series “You” and met her former co-stars in the latest installment of the “Haunting” anthology series. The actress is active on Instagram though her account is free of sponsors.

In the upcoming TV series “You,” the actress portrays a wealthy young woman who keeps a wealthy lifestyle. To get that role the actress visited trendy neighborhood and study life of wealthy people. “I tried to think about what it would be like to grow up with a lot of money, with all the resources that a lot of these people have.”

The actress wasn’t born in a wealthy family and had a financial struggle in the begging of her career. But today her salary from regular work on the TV projects allows her to feel independent. Her net worth is about $300,000.

She likes her privacy, but also the actress often shared pictures with her family on Instagram. She is not married, and there are no rumors about her boyfriend.

Many people found many resemblances to Victoria and Kat Dennings. Indeed, in the TV series “You,” the actress has got much familiar in appearance with Kat.