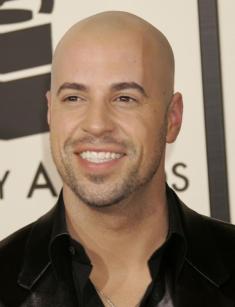 Chris Daughtry is a famous singer who is the lead vocalist and rhythm guitarist for the band Daughtry. Chris is the author of songs. After becoming recognized as a musician, he successfully starred several times as an actor.

Chris continued to make music and to progress as a musician. Andy Waldeck, a frontman for Earth to Andy, an American alternative rock band, supported Chris at the beginning of his career and he appeared first on his debut album.

Chris performed a lot during his studies at high school. He joined rock bands and played with them at local places. Being a student, Chris also performed in two stage productions: the musical The Wiz and the play Peter Pan.

Chris formed his first band, which he called Cadence. In 1999, the group issued an album All Eyes on You. In the band, Chris was a singer and played rhythm guitar. At that time, he had been joining other rock bands to perform on stage. Absent Element was one of these bands, where Chris was on lead vocals. In 2005, the musicians presented the album Uprooted, which contained the songs "Conviction" and "Breakdown." Later Chris would later mix these two songs and record a new song "Breakdown."

In 2005, the singer started to attend auditions. Chris auditioned for the famous show American Idol. He went there with the rock band The Box Tops'. He passed the audition, but the opinions of judges divided: the singer was approved by Paula Abdul and Randy Jackson and disapproved by Simon Cowell. Eventually, Chris advanced in his career. He became recognizable and was among the top musicians.

Although, when Chris sang a minor-key rendition of Johnny Cash's "I Walk the Line," it caused controversy. When Chris was the final four of the show in May 2006, it was expected that Katharine McPhee would be eliminated, but Ryan Seacrest then announced that Chris would be eliminated. Many people were surprised because nobody thought it would happen. In an interview after his elimination, Chris said that he felt he got voted off because his fans were "overconfident" that he would be safe, so they did not call and vote.

After leaving the show, the singer had made appearances on several TV shows. Chris was asked to audition as the lead vocalist for the band Fuel but he declined the offer because he wanted to form his own band. In 2008, he appeared on the show with a song A Little Less Conversation.

In December 2019, he was offered to participate in the show The Masked Singer Season 2 as the Rottweiler. In the clue video, Rottweiler said that he went through difficult times early in life but he has no regrets. The video also showed him walking into a crime scene with a chalk outline of a body on the ground. This suggested to some of the judges that he was an actor who played a detective role in a movie or show. There were also two references to football in the clue video. The judges then offered their guesses. Jeong thought Rottweiler was from North Carolina and guessed he could be Gavin DeGraw. Scherzinger suggested it could be the Glee star, Darren Criss. McCarthy said that if Rottweiler painted the portrait of Triumph then he must be a good artist. She then suggested he could be James Franco.

In 2006, Chris debuted with his new album. In July, he had signed a contract with 19 Entertainment and RCA Records. He started to work on the new album and also had a plan to form his own band. His ideas were realized, and he appeared as a leader of the band under the name Daughtry. Their debut album was released in November 2006 as well as their first single "It's Not Over". It was a big success: the album became number one in Billboard Charts. After a number of performances, the band was the winner of multiple awards at the "2007 American Music Awards".

In August 2009, the band Daughtry went on tours with other rock bands. They performed in Orlando, Florida and gave the final show in Tempe, Arizona. Bands even gave a concert in Chris's hometown.

In 2011, the band Daughtry released a new album Break the Spell. In January, Chris announced they were working on their fourth studio album. The first single to Daughtry's fourth album is called "Waiting for Superman". In September 2013, they announced on their website that the new album was titled Baptized.

The band presented two new albums in 2016 and in 2018, which were warmly received by the audience.

The singer has made a lot of collaborations with other musicians. In 2008, he worked with the American rock band Sevendust and the Canadian rock band Theory of a Deadman. In 2009, the band Daughtry collaborated with Timbaland on their song "Long Way Down". Chris also co-wrote the song "Send Me All Your Angels" for American Idol season 8 winner Kris Allen's debut album. He later performed lead vocals on the cover Def Leppard's song "Photograph" with Carlos Santana. It was released in September 2010, with a performance on the Dancing with the Stars results show that day.

The musician shared with his audience, who influenced his work. In his youth, the singer used to listen to numerous rock and hard rock bands. His musical influences include American rock band Creed, English rock band Bush, and many other rock bands including Live, Pearl Jam, Alice in Chains, Journey, Bon Jovi, and Fuel.

The singer has been married to Deanna Daughtry since November 2000. He has four children: a stepdaughter, Hannah from his wife's previous marriage, a stepson, Griffin and twins, Adalynn Rose and Noah James. Chris has been married to his wife, Deanna, for almost 19 years. However, the couple has been through a number of difficult moments. The musician admitted that during his tours he was unfaithful to his wife. But she was strong enough to forgive him. Deanna supported him in every challenging moment which he faced during his life. In 2019, she shared her personal secret: that she is bisexual. The two said that they are always working on their relationships and, despite all the moments, they value each other.

Speaking of the singer's friends, Ace Young have been friends since they met at the show's Denver auditions. Young said they became friends because they shared similar upbringings and were both "big on family."

Daughtry is a Christian.

Chris also tried himself in acting. He made his acting debut in the 100th episode of the crime show CSI: New York. In 2016, Daughtry portrayed Judas Iscariot in the Biblical live version of the music television special The Passion.

Chris is also a painter, as he is interested in drawing comics and is a fan of Batman. In 2016, he published his first comic book art.

The singer has a net worth estimated at $10 million.