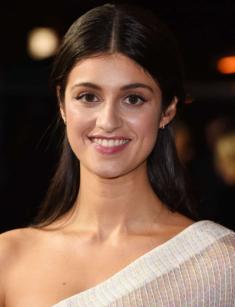 The UK native, Anya Chalotra is known as a prospective English actress. She appeared in several TV series, movies and received wide recognition in 2018 after it was announced that Anya became one of the new cast members of the Netflix’s TV series The Witcher. In 2019 Chalotra appeared at San Diego Comic-Con along with other cast members. The young actress has a net worth, which is roughly estimated at $100,000, including all of her earnings.

Anya is from the village, situated to the south-west of Wolverhampton, West Midlands. Her parents were of Indian nationality. From an early age, she was interested in acting and dancing. That’s why she attended one of Staffordshire's leading schools – St. Dominic’s. There Chalotra developed her acting skills, starring in a lot of school’s performances. School’s head of expressive arts helped Anya a lot at the beginning of her studying.

Anya played her roles excellent in her senior performances and was one of the best in a drama group. She also gained a gold medal in LAMDA acting with the Momo Academy of Drama. After leaving high school sixth form with Theatre Studies among her three A-Levels, Anya continued her theatre background, first at the LAMDA on the foundation course and then at The Guildhall School of Music and Drama.

At the beginning of her acting career, Chalotra performed at various London theaters. In 2017 a young actress was surprising audiences in the leading heroine’s role in a play at London’s iconic Shakespeare’s Globe Theatre. Chalotra played in the production of Much Ado About Nothing. She was highly estimated by English critics, who called her playing as “excellent”, “appealing,” and “captivating”.

Thanks to that role, Anya was named to “best actress in a play” nomination. The Stage newspaper gave an award to recognized fresh talents. Soon, Anya took roles in various plays. She even starred on the stage of The London’s Royal National Theatre. Her playing in The Village was lauded by the critics. The young actress performed the role of a brave teen, which inspired women to resist the policeman’s cruelty and tyranny.

Chalotra first appeared on TV as a cast member of Wanderlust in 2018. She played Jennifer Ashman. BBC and Netflix released the series. Soon, Chalotra joined the cast of The ABC Murders, performing as Lily Marbury. Also, she was voice star as Robin Loxley in the animated TV series Sherwood. However, Anya received her major role on October 10, 2018, when she and Freya Allen were revealed as new cast members of The Witcher, the short story fantasy TV series of Netflix.

Chalotra was chosen to perform the role of a powerful witch, Yennefer. The fans joyfully received the news about turning The Witcher from video game into a TV series. However, they were disappointed by some cast of actors. The Witcher’s fans considered Anya too young to play the role of Yennefer. But the series’ creator supported the decision of casting Chalotra. Lauren said that nobody could play the character better than her.

It was not a secret that The Witcher was represented in various comic books, tabletop games, and Polish-language movie adaptations. The video games were the primary visual representation of the characters. However, the showrunner of Netflix’s project, Lauren Schmidt Hissrich, said that although she was a games’ fan, those Netflix series would be its own adaptation of the Witcher world, not reliant or specifically based on the game.

In July 2019, the cast members of the Witcher visited Comic-Con in San Diego, appearing on a lot of various images. There was moderated the panel discussion with them. Fans were treated to the first look at the new series The Witcher and star Henry Cavill previewed the teaser trailer for the room.

During a roundtable interview, Chalotra was asked whether it was odd to portray a character that so many folks already have such a strong impression of or connection to. She answered:

"Yeah. I think I kind of distance myself from that though. I think I definitely had faith in those who cast me and in myself that I was right for this part because that was - whatever I gave to the character was something that they were looking for and wanted to give Yennefer. So I never worried about that, I don't think. But I definitely always, I always looked back at the source material, was making sure that I was staying true to the books because that's something that I really care about.”

Answering the question, how did Anya view Yennefer as a character and how did she try to portray that on screen, the actress said:

“Hmmm, because I was allowed to play Yennefer from 14 years old, I was able to live her life experiences or the life experience newly written up until the moment we all know that harsh exterior. So, I got to know all her vulnerabilities and what makes her this person and yeah, to be allowed to play that on screen was a gift.”

“My favorite part was being able to discover all those layers underneath what we know Yennefer as, and you know where we meet her. That was my favorite part. My favorite person, to work with? That's really hard, I can't say that (laughs). I don't think I have one (...) But I'm not even joking, everyone in the cast is a beautiful human being. So, it's amazing to make something like this with those people.”

There is no any information about Chalotra’s current relationship and boyfriend. According to several sources, the young lady was dating a writer and journalist from Honduras for some time. Anya is a young, beautiful, and slim girl. Her body measurements are only 32B-25-34. Given the roots going back to the country of Chalotra’s ancestors, it is not surprising that she is Hindu. The young star is not active on social media; that’s why there only 35 pictures in four years on her Instagram.