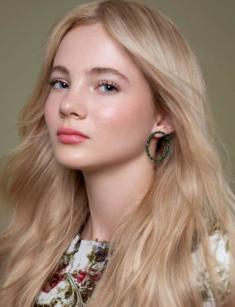 The native of the United Kingdom, Freya Allan is a well-known English actress. She appeared in several TV series and received wide recognition in 2018 after it was announced that Freya became one of the new cast members of the Netflix’s TV series The Witcher. In 2019 Freya appeared at San Diego Comic-Con along with other cast members. The young actress has a net worth, which is roughly estimated at $500,000, including all of her earnings.

Freya is from the south-eastern county of England. Her birthday was on September 6, 2001. Following her ethnicity, Freya is Christian. From an early age, she was interested in singing and dancing. That’s why she attended one of Wiltshire's leading Performing Arts Schools, Starcast. Freya played her roles excellent in her senior performances and was one of the best in a drama group.

Freya was a young and promising actress when she kicked off her acting career at the age of 14. In 2015 she made her first movie appearance, playing Young Minerva in an episode of Into the Badlands TV series. The episode was called Chapter XXI: Carry Tiger to Mountain. Two years later, Freya got the role of Caitlin in Bluebird. The same year, she appeared in Captain Fierce and Christmas Tree.

Also, she filmed in a sci-fi miniseries based on H.G. Well’s The War of the Worlds in 2018. Freya’s performance was highly estimated by critics. She got recognition among popular filmmakers, which allowed her to hope for major roles. And on October 10, 2018, Freya Allen and Anya Chalotra were revealed as new cast members of The Witcher, the short story fantasy TV series of Netflix. Freya was chosen to perform the role of Ciri, a princess of Cintra, and Chalotra played a powerful witch, Yennefer.

It was not a secret that The Witcher was represented in various comic books, tabletop games, and Polish-language movie adaptations. The video games were the primary visual representation of the characters. However, the showrunner of Netflix’s project, Lauren Schmidt Hissrich, said that although she was a games’ fan, those Netflix series would be its own adaptation of the Witcher world, not reliant or specifically based on the game.

In July 2019, the cast members of the Witcher visited Comic-Con in San Diego, appearing on a lot of various images. There was moderated the panel discussion with them. Fans were treated to the first look at the new series The Witcher and star Henry Cavill previewed the teaser trailer for the room.

A third clip showed Ciri wandering through the woods, seemingly in a trance, before seeing a bright glowing light and a roaring cacophony of voices, before being unexpectedly ambushed by a band of female warriors known as Dryads. Ciri asked for help and said she's lost and looking for "Dara," and the leader of the Dryads gestured for Ciri to follow her.

During the event, Freya gave an interview to TheWitcher.tv. Speaking about her character’s favorite part, she said:

“First of all, I love the way she's been written. She's definitely a brave character, but it's shown realistically. At this stage in her life, you know, often people think of the character as brave, that definitely there has to be a lack of emotion. But actually, it's what shows she's so courageous and emphasizes the fact that she is grieving and going through horrific situations. And yet, she's still continuing, and she doesn't collapse under it all.

I think she's a really brilliant character for girls to see. Because she values her opinion and the utilization of voice, and I think she has a lot of people who are telling her what she shouldn't do with her future which would be confusing at that age. But ultimately, she takes her future in her own hands, and she decides what she's going to do with it. That's something that a lot of young people can learn that the future is yours.”

“There was this one day, which was just hilarious because we spent the whole day along with this long table. It had this revolting-smelling meat, and we just had to sit there for hours. And you could tell we were all just going like a little bit loopy.”

And then Frey was asked about her favorite location of the series:

“It was just one day where it was in Hungary. It was just this beautiful backdrop. We were on this kind of hill, and it was just incredible. I really felt like I was in a fantasy world. And there was snow on the ground. Then there was a sunrise because we got there so late. It was just beautiful. That was my favorite location.”

There is no any information about Freya’s relationships and boyfriends. According to several sources, young lady isn’t dating with anybody. Freya is young, and all rumors will come in the future. Also, the young actress is not active on social media. There are very few photos on her Instagram.