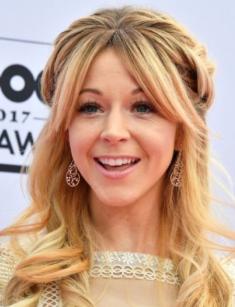 Lindsey Stirling is a famous American musician: violinist, singer, and songwriter. In her performances, she merges violin music and choreography and publishes music videos on her YouTube channel. Stirling represents various music styles, including classical, rock music, and even EDM. Besides original songs, Lindsey Stirling is also known for covers of other artists' top songs.

She is mostly known for her songs «Into the Woods», «When the Stars Align», «I Wonder as I Wander» and «Come With Us.»

So, how much time did it take for Stirling to become popular? Let’s know!

Lindsey Stirling's birthdate is September 21, 1986. She was born in Santa Ana, Orange, California to the family of Stephen and Diane Stirling but grew up in Gilbert, Arizona. As a 5-year-old child, Lindsey, being under an impression by a local symphony orchestra, asked her parents to teach her how to play the violin. In spite of the difficult financial situation in the family, Linsey started taking lessons at the age of 6. She had been learning for 12 years.

Stirling studied at Greenfield Junior High, later – at Mesquite High School. After, she entered Brigham Young University. Studying there, she dedicated herself to missionary activity in The Church of Jesus Christ of Latter-day Saints. In 2009 Lindsey returned to Provo to continue studying where she lived till 2012. Having graduated, she alongside her family moved to Arizona again.

When she was 16, the girl became a member of a rock band called Stomp on Melvin. As part of her experience with the group, Stirling wrote a solo violin rock song, and her performance helped her to win the state title of Arizona's Junior Miss and claim the Spirit Award in the America's Junior Miss Finals competition. Besides, in her youth, Stirling performed with a group «Charley Jenkins.»

Shortly after, in 2011 cinematographer Devin Graham referred to her asking for making a YouTube video together. They decided to make a video clip for her song, «Spontaneous Me.» It was filmed the week of May 9, 2011. The video was published on her channel LindseyStomp (it got its name in honor of Stirling's first music band), raised musician's fame and she started shooting videos more often. The majority of them were recorded by Devin Graham. In 2012 the celebrity started a new channel for her daily videos.

September 18, 2012, was marked by Stirling's debut album. The same month, she embarked on her first North American tour which was closed on November, 26. Having finished the performances, Lindsey announced about her second USA tour and European tour. So, she gave the first concert in January 2013; the last was given on April 5. Totally, Lindsey visited 55 cities around the USA, Canada, and Europe. Stirling's third tour was started on May 22 in Russia, Moscow and was closed on June 29 in Sweden – totally; the musician has given performances in 26 cities.

In December 2012, Lindsey's composition «Crystallize» was named 8th most popular on YouTube – it had got more than 42 million views by the moment.

In 2013 the singer took part in a campaign «I'm a Mormon» by The Church of Jesus Christ of Latter-day Saints. There she was a speaker and told how the faith had helped her to struggle with anorexia.

In July 2013, she announced her future tour around Asia, Australia, and Russia.

On April 29, 2014, Lindsey released her second album entitled «Shatter Me.» With such hot songs as «Beyond the Veil», «Shatter Me», «Night Vision», «We are Giants», and «Heist», the album debuted at the second position on the US Billboard 200. It also charted in Canada, Austria, Germany, and Switzerland. It sold a total of 56,000 copies in its first week.

On May 13, 2014, Lindsey performed in San-Diego – it was her first show of the second world tour. Generally, the tour consisted of 77 performances – 48 were held in North America, 29 were held in Europe. The concert tour was arranged as a support of her album. In one month, the musician managed to sell 119 000 copies of the collection. Interestingly, her debut album's sells' level was evaluated at 108 000 copies.

On August 6, 2014, she performed the song «Shatter Me» alongside Lzzy Hale on «America's Got Talent.» The same month, she announced she would collaborate with several musicians. So, Stirling worked with the band Pentatonix – they co-wrote the top hit «Papaoutai» for their third studio album PTX, Vol. III. Besides, the singer partnered with Jessie J on her album «Sweet Talker,» with Sam Tsui on the track «Heads Up,» with Becky G on «Christmas C'mon», with Taylor Davis, David Garrett and Vanessa Mae.

In 2015 Stirling played a secondary role in the dance drama film Breaking Through. Directed by John Swetnam, the movie tells the story about an average girl with aspirations to become a great dancer. She uses her YouTube channel to gain popularity, only to find later that name and fame comes with a price. The movie included actors Sophia Aguiar, Robert Roldan, Jordan Rodrigues, and Julie Warner.

On June 28, 2016, Stirling announced her upcoming album. It was released on August 19, 2016. Shortly after, she published new track «The Arena» on her YouTube channel.

In August 2016, Stirling performed in the opening ceremony of The International 2016, a Dota 2 tournament which had the biggest prize pool in eSports history.

In September 2017, Stirling was announced as one of the celebrities who would go on season 25 of Dancing with the Stars. She was paired with professional dancer Mark Ballas. Stirling and Ballas got to the second place. She appeared on the show again on October 15, 2018 episode, dancing a «trio dance» with Bobby Bones and Sharna Burgess.

In 2018, she appeared on the track «Hi-Lo,» the third track of Evanescence's fourth studio album «Synthesis,» and toured with the band in the U.S. during that summer.

The same year, the celebrity was invited to perform at the BlizzCon Music Festival.

In December 2018, Stirling was a guest on Darci Lynne: My Hometown Christmas.

Lindsey Stirling’s net worth is evaluated at $12 million.

Lindsey started her way to professional success and prominence in 2010 – she took part in America's Got Talent audition, and passed it well. On the show she got recognition from the audience. She impressed the judges on America's Got Talent, not only by mixing hip-hop, pop, and classical music on the violin but by incorporating dancing with playing the violin – her distinguishing feature. However, her effort to improve a choreography in her performance in a quarter-final was not endorsed by the judges. Although they said the girl had obvious talent, they claimed she lacked skills. Having left the show, Lindsey began a solo career and released a mini-album in 2010.

On October 1, 2013, Lindsey Stirling, alongside the non-profit Atlanta Music Project started a campaign spreading appreciation of music to children who might not otherwise have the chance. The project was aimed to inspire social change by providing Atlanta's under-served youth the opportunity to learn and perform music in orchestras and choirs. Lindsey donated money to the campaign, and they provided music training for 50 children.

In 2014 the musician teamed with Cirque du Soleil for the second annual One Night for One Drop in Las Vegas. There was the show in the Mandalay Bay Resort and Casino in celebration of World Water Day, a day which encourages people to conserve water resources in an effort to make clean water accessible to all.

The musician uses many different violins. It depends on her performances. When she performs live, Lindsey plays Yamaha SV-250 Silent Violin Pro and Luis and Clark «Nero» carbon fiber acoustic violin. While recording music in the studio, Stirling prefers 1900s Ernst Heinrich Roth «Roth» acoustic violin for most of the time and her Yamaha silent violin for an extremely clean sound. Earlier, the singer played «Roth» on live performances but gave it up because she was sweating so much during the show.

In her life, Stirling has had several serious relationships. Once she dated Devin Graham, the videographer and co-director from her first music video, «Crystallize.»

Later the woman began a relationship with Ryan Weed. He originally hails from Utah, and for work, a source has stated that he has owned an independent fragrance house and that he reportedly ran a kayak and canoe rental service called Hawaii Beach Time. They broke up in summer, 2017.

In addition to dealing with a break up that year, Lindsey Stirling had to get through the death of her father Stephen, who had been battling cancer. He died on January 24, 2017.