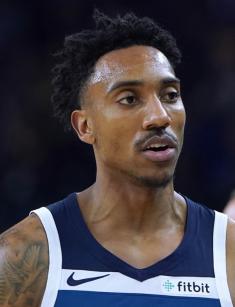 Jeff Teague is a basketball player and member of the Atlanta Hawks. He started his career in the team in 2009 and returned there recently after four years of performing for other clubs.

The would-be sportsman was born in summer 1988 in Indiana. The boy’s relatives were involved in sports: the dad, Shawn, used to play basketball as a college student, and the Memphis Hustle player Marquis Teague was his cousin.

Jeffrey was fond of sports since early childhood. He received his education at Pike High School and supported its basketball team, creating his impressive box score from the very beginning. By graduation, young Teague reached number nine in the list of best point guards across the United States.

The athlete received a scholarship at Wake Forest University and joined its team, the Demon Deacons, at once. The rookie immediately stood out among others: he was the second best scorer in the club with an average 13.9 per game. The next season was even more efficient, with improved stats and a tremendous victory over North Carolina.

Jeff felt strong enough to participate in the NBA draft after two college years. In 2009, he signed his first contract with the Atlanta Hawks.

Although the rookie was not often seen coming off bench in his first year, he just needed some time to adjust and polish his skills. His average points were gradually growing, and the number of games where he was a starter increased.

During the 2011-2012 season, Teague was named the most improved team member. His regular and playoff career-highs were climbing up, too: from 24 in 2009 to 34 by 2013. Speaking of proper defense, Jeff told journalists the secret of his success: “Effort. And wanting to win. That’s it”.

The 2014-2015 season was special for the hard-working point guard: he could boast his first All-Star reserve selection for the 2015 NBA All-Star Game. Atlanta’s performance was steadily good until the finals, where the Cleveland Cavaliers defeated them.

In 2015-2016, Teague’s teammate Dennis Schröder made a considerable point-guard competitor for him; Jeff’s results worsened a little just at that moment. The next season, the sportsman transferred to the Indiana Pacers for a year.

The Minnesota Timberwolves became a new home for Jeffrey. Unfortunately, he did not have many opportunities to sparkle his talent due to leg and foot injuries, following one another. He had to have surgery and recover for a while.

There is not much information about the man’s romances. He used to date the Tyrina Lee, who probably caused the break-up between the rapper Future and Ciara; why the couple split up is unknown. As for now, there is no news about Jeff’s girlfriend – he is probably single.

In January 2020, the ESPN columnist Adrian Wojnarowski revealed Jeffrey’s trade to Atlanta on his Twitter page; the athlete was purchased in exchange for Allen Crabbe.

Jeff Teague’s net worth is about $40 million in 2020; his salary in the Minnesota Timberwolves was $19 million.