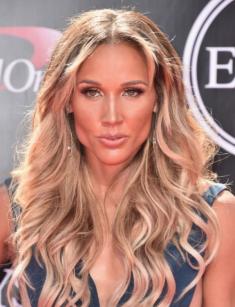 Lolo Jones is an American athlete who has participated in both the Winter and Summer Olympic Games. She is a winner of multiple prestigious prizes in track and field and bobsledding

The future sports star was born in summer 1982 in Iowa. The girl’s childhood was tough. There were six kids in the family, and the mother had to take any job to support them; little Lori frequently moved and changed schools. The father worked in the army and then got into prison.

Jones dreamed of becoming a professional athlete; she was reluctant to transfer to a school without a track because she would not be able to practice. At some point, the young woman parted with her family. She entered Theodore Roosevelt High School and met the coach Phil Ferguson, who arranged her residence with several local families and gave the opportunity to focus on sport and studies.

The young woman continued her education at Louisiana State University, which Odell Beckham Jr. attended as well. She concentrated on the 60-meter and 100-meter hurdles and earned her first success during her second year, finishing second at the NCAA Indoor Championships. The next year, she won the tournament.

Financial problems made Jones consider quitting; an economist in training, she could get hired to collect some money. Nevertheless, she decided to continue.

The athlete did not qualify for the 2004 Olympics but rehabilitated soon and won the competition in Heusden-Zolder. 2007 was marked with the debuting 60-meter national championship victory; things started improving quickly.

Following Jones’s accomplishments, the expectations of winning the Olympic Medal in 2008 were great. Nevertheless, the athlete stumbled and became number seven. Due to some injuries, she had to miss several events but returned soon and celebrated the World Indoor Championships victory.

London 2012 was disappointing again: Lolo was number four. Although Jones has not won the Olympic gold, she brought her country the IAAF Continental Cup silver medal and NACAC Championships gold medal in 2010 and 2015, correspondingly.

After the failure in Beijing, Jones needed something to distract herself. She took up bobsledding and practiced for two years, joining the national team two years later.

The athlete is proud of her achievements; she says she does her best. The woman’s shape is excellent; fans emphasize her remarkable abs – the result of a systematic core workout.

The starry hurdler is not married. In 2012, she revealed in the show Real Sports she was a virgin and planned to keep it that way until she would find a husband. The news went viral; later, Jones admitted in her interview with Kevin Hart it was a mistake to discuss the subject. According to Lolo, the truth shooed away potential partners from her.

The hurdler has had several romances. In 2017, there was a short affair with the football player Brad Wing; the then NBA rookie Blake Griffin was her boyfriend in 2018. After Lolo commented on Jimmy Butler’s post on Instagram, there were many speculations about their relationship.

Apart from her sports activities, Jones is a popular TV figure. In 2014, she appeared in Dancing with the Stars but left the show soon; January 2019 brought Celebrity Big Brother and a heated argument with Tamar Braxton, which almost ended in a fight. In 2013, Lori collaborated with Carmelo Anthony in the DO: MORE campaign encouraging people to go beyond their comfort zone.

Fans can follow the latest events of the woman’s life on her official Instagram. There is also a Twitter page, where Lolo shares funny memes and various thoughts.

Lolo Jones is unlikely to take part in the Olympic Games in Tokyo. She told journalists that practicing and competing with opponents ten years younger became a challenge for her; according to the athlete’s agent, she needs time to recover.