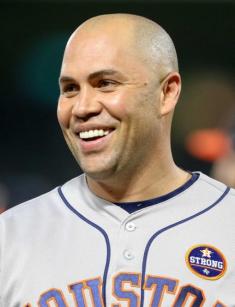 Carlos Beltrán is a retired Puerto-Rican baseball outfielder known for his starry MBL games. He started his career in the late 1990s and finished his sports career as a member of the Houston Astros and World Series champion.

The would-be sports celebrity was born in spring 1977 in Puerto Rico. The father worked for a pharmaceutical enterprise while the mother kept the house and looked after the kids: the boys Nino and Carlos and the girls Marie and Liz.

Beltrán’s early life was calm and full of sports: he loved volleyball and baseball. In 1995, the young man finished Fernando Callejo High School and began to develop his baseball career.

Carlos gained the necessary experience as a minor league player with the Gulf Coast Royals and other teams. He taught himself left-handed techniques and became good enough to join the Kansas City Royals in 1998. His stats improved quickly; the athlete was awarded the American League Rookie of the Year.

In 2000, Beltrán missed most games due to an injury but got back into his shape soon. By 2004, he celebrated eight home runs and earned the American League Player of the Month award.

In 2004, the sportsman batted .258 and had 23 home runs with the Houston Astros. Further on, he became a free agent with the New York Mets. The beginning was troublesome: Beltrán lacked power and speed because of a recent injury; the situation improved soon. Carlos had All-Star Game appearances, won three Gold Gloves, and kept his performance spotless.

In 2012-2013, the outfielder collaborated with the St. Louis Cardinals. That period was notable for many records and significant achievements; for instance, he helped to reach the tie with the Los Angeles Dodgers at the National League Championship Series.

Carlos spent 2014-2016 with the New York Yankees; they were marked with excellent moments and frequent injuries. Following a season in the Rangers, Beltrán reunited with the Houston Astros for a year and led them to the World Series triumph. As a winner, he refused to attend the honoring event with the team and meet Donald Trump to show his disappointment with how the government dealt with the consequences of Hurricane Maria.

Beltrán is a patriot of his motherland and supported it four times at the World Baseball Classic games.

Although the team lost to the United States in 2017, the athlete was named to the All-World Baseball Classic team anyway.

In 2009, the sportsman founded the Carlos Beltrán Baseball Academy; he continued to take care of it after retirement.

The former player showed much interest in managerial work; he could have become a member of the Yankees staff, but the club selected Aaron Boone. In December 2018, Carlos was given the job of a special adviser to the executive Brian Cashman.

At the end of 2019, the New York Mets invited the man to the position of a manager and offered a contract for three seasons. However, Beltrán had no chance to contribute to a single game due to the sign-stealing bombshell news.

Today, Carlos is a happy husband and father of three. He started dating his future wife, Jessica Lugo, in 1998 and married her the next year. The first child, the daughter Ivana, was born in 2007; another girl and a boy followed. Besides, Jessica miscarried in 2014.

The sportsman has been involved in a major scandal with the Houston Astros. According to the MLB investigation, the team cheated during their World Series performance in 2017 and stole signs. Beltrán’s name was specified in the revealing report; the New York Mets immediately fired him and signed a contract with Luis Rojas. Alex Cora, who worked as a bench coach for Houston back then, also split up with the Boston Red Sox.

Carlos Beltrán’s net worth is about $80 million in 2020. His Houston earnings were $16 million in the last season.