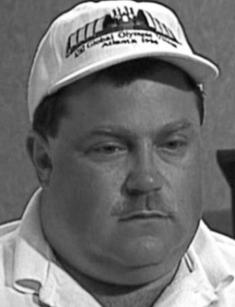 Richard Allensworth Jewell was an American citizen who worked in police and security. He became known after the bombing at the Centennial Olympic Park in 1996. Richard was the one who found the bomb and evacuated people, but later, he was suspected in that crime and considered to be a bomber, although there was no evidence. In October that year, his name finally was cleared.

Richard Jewell was born in Georgia in 1962 to Bobi and Robert Earl White. When Richard was four, his parents divorced, and later his mother married John Jewell, who adopted the boy. Then, his family became Dana Jewell, his wife.

In summer 1996, there was the Summer Olympics in Atlanta, Georgia. On July 27, 1996, at the Centennial Olympic Park, lots of people came to see a concert. After midnight, Eric Robert Rudolph left a green bag under the bench, and that backpack contained a pipe bomb. Jewell, who worked there as a security guard, found that bag and called officers of the Georgia Bureau of Investigation. They started evacuating people, and the bomb squad was supposed to investigate this backpack. 13 minutes later, there was an explosion that killed Alice Hawthorne and injured more than one hundred people, including a cameraman.

Right after that day, news reports called Jewell, a hero who helped to discover that backpack and to clear the area immediately. Only three days after, The Atlanta Journal-Constitution announced that the FBI considered Richard as a possible suspect. The next weeks turned out to be really hard for him because the media focused on Jewell and called him "person of interest," meaning that he was an "interest" for police and FBI. Almost every media source suggested that Richard might do that so he could become a hero in everyone's eyes.

The United States Department of Justice found out that the FBI had attempted to manipulate Richard and waive his constitutional rights. However, the “suspect” was still getting some humiliation. The comedian Jay Leno called him "Una-doofus" in reference to the Unabomber. Jewell never received formal charges, although the FBI publicly did perquisition of his house two times, investigated his background, and had a close observation of a poor man for 24 hours a day.

Only in October 1996, Jewell received a letter from the US Attorney, Kent Alexander, that formally cleared Richard, and he was no longer a target of the investigation. In 2001, Robert Mueller took charge of the FBI and started doing a review of some FBI bloomers, including the 1996 situation. After that, Jewell filed lawsuits against some media sources that denigrated his reputation. NBC paid the compensation of $500,000 to him.

The real terrorist, Eric Rudolph, was caught in 2003, and two years later, he made a statement, in which he pleaded guilty to various bombings.

On August 29, 2007, Jewell died at the age of 44. The death cause was heart failure. Besides heart, Richard had also issues with kidneys and diabetes.

On December 13, 2019, the biographical drama titled Richard Jewell will be released. The director of that movie is Clint Eastwood, with a net worth of $375 million, and the documentary was based on the article American Nightmare written in 1997. Richard will be portrayed by the actor Paul Walter Hauser, and the cast also includes Sam Rockwell and Kathy Bates.