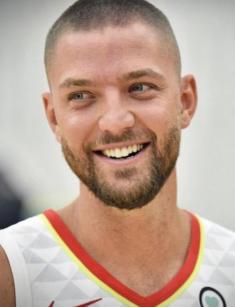 Chandler Parsons is a basketball player from the United States. The athlete joined the NBA in 2011 and changed several teams until the Atlanta Hawks became his current team.

The would-be sportsman was born in fall 1988 in Florida. There is not much information about Parsons’s early years. There were two kids in the family: Chandler and his brother, Chris.

The boy attended Lake Howell High School and began to play for its basketball team. His sports talents helped him lead the school to the state victory in 2007; Parsons earned 30 points in the final.

Chandler spent four years with his college team, Florida Gators. In 2007, he enrolled at the University of Florida, where the coach Billy Donovan was employed; the young man dreamed of collaboration with him.

Parsons was polishing his skills persistently, and the endeavor paid off in 2011 when he received the SEC Player of the Year. The last season brought the following results: 11.3 average points per match, 7.8 rebounds, and 34.1 minutes of game time. Besides, the team took part in the NCAA Tournament twice in this period.

At the end of 2011, the sportsman signed a contract with the Houston Rockets. He felt comfortable on the professional level and began to earn points for the team; his career high reached 23 in the rookie year and kept rising.

The impressive career stats helped instate the free-agent status in 2014. Chandler joined the Dallas Mavericks, who offered him a $46 million agreement, the same year. The athlete suffered from an ankle injury but returned to a basketball ground for a while. Unfortunately, new traumas prevented him from giving all his strength to games and led to two knee surgeries in May 2015 and March 2016.

In 2016, the Memphis Grizzlies became a new home for Parsons. His debuting game against the Portland Trail Blazers occurred on November 6; it was far from being splendid. Health issues continued to influence the sportsman’s performance, and he missed many matches due to a partial tear of the meniscus. In 2019, the Grizzlies traded the player to the Atlanta Hawks, but he had only five matches with the new team.

Handsome and charming, the sportsman is known for his numerous affairs with top beauties; some reporters even called him “the biggest Playboy in the NBA”. In 2011-2013, he was seeing the journalist Robyn Crowley and started dating the singer Christina Perri the next year. The models Toni Garrn and Cassie Amato were his girlfriends, too.

At the end of 2019, the paparazzi saw the sportsman with Haylee Harrison, the sister of Devin Booker’s date. It is too early to see the woman as his future wife, though. The 31-year-old bachelor just enjoys his life and attends parties, like the offseason celebration in a yacht; All-Star Blake Griffin was there as well.

In January 2020, Parsons had a brain injury and other traumas due to a road accident involving a drunk driver. Whether he will be able to return to sport after recovery is unknown.

Chandler Parsons’s net worth is $25 million in 2020; his earnings come from sports activities and commercials. Forbes reported his endorsements were $1 million in 2018.