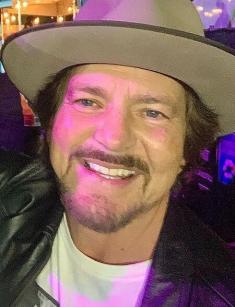 Edward Louis Severson III, who is simply known as Eddie Jerome Vedder and who was born on December 23, 1964, is an American rock star, singer, songwriter, and musician. He is best known for being a vocalist and guitarist in the Pearl Jam rock band. Having a baritone type of voice, he is considered to be the seventh-best lead singer of all time, according to the Rolling Stones. Edward is of American nationality and white ethnicity.

The singer was born in Evanston, which is a suburb of Chicago, Illinois. His parents are Karen Le Vedder and Edward Louis Severson Jr. It is known that Eddie has Danish, German, Norwegian, and Dutch ancestry. In his childhood, Eddie lived with his mom, stepfather, and other 7 siblings. He studied at the local high school in his hometown and then attended a community college in Chicago.

Eddie's career began after former members of Mother Love Bone heard his demo and then invited him to audition. He passed it brilliantly, and then the team began to work with Eddie.

Pearl Jam was created by Jeff Ament, Stone Gossard, and Mike McCready in 1990. Eddie and three other drummers joined them. This band's record, which was certified 13 platinum, became one of the best-selling alternatives of the 1990s. The grunge movement and the Seattle music scene's quick rise to fame and notoriety put the band in the spotlight. In 1993, the song "Jeremy" was nominated for Grammy Awards for Best Rock Song and Best Hard Rock Performance. Binaural, the band's sixth studio album, was released in 2000, and it marked the beginning of a popular and ongoing series of authorized bootlegs.

For his non-musical contributions, such as design and artwork, Eddie adopts the alias "Jerome Turner" on Pearl Jam releases. He has also written under the alias "Wes C. Addle."

In 1994, Eddie got engaged to Beth Liebling, whom he had known since childhood. But after six years of living together, they decided to divorce. In 2010, Eddie married for the second time; Jill McCormick became his wife. The couple even has children: Olivia and Harper. The singer often does charity work, donating money to medical organizations. Also, at the beginning of his career, he invested money in the renovation of the school where he studied.

Here is the Eddie's full discography (solo records only):

Except EPs and albums, Eddie's discography also includes about 14 singles.