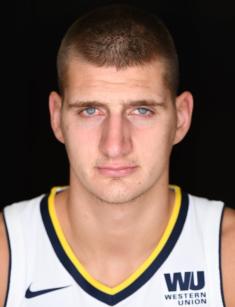 Nikola Jokić is the Joker in the basketball world: the young Serbian athlete stands out for his ability to act in the most urgent moments. He is currently playing for the Denver Nuggets.

The would-be sportsman was born in winter 1995 in Sombor, Serbia. Interestingly, Jokić was not fond of physical activities as a kid; he liked to ride horses and goof around at school.

There were three sons in the family. The example of the elder brother influenced young Nikola: Nemanja used to play for the college basketball team of the University of Detroit Mercy.

In 2012, 16-year-old Jokić joined the Mega Vizura junior team based in the capital of the country. Little by little, he gained experience in the senior team, too, and had some Serbian League matches.

The next season, the Denver Nuggets decided to draft the Serbian star and signed a contract with him after the successful summer league performance. Jokić’s stats were improving: from 27 career-high points in 2016 to 47 in 2020.

The man started getting prizes in the rookie year and enjoyed the All-NBA First Team in 2019. He set several records, like the fastest NBA triple-double: 14 min. and 33 sec.

In 2013, Jokić participated in the FIBA Under-19 World Championship in 2013 and helped gain a silver medal.

The athlete’s excellent skills in defense and overall efficiency provided him with a place in the national team for the Olympic Games in Rio de Janeiro; Serbia got a silver medal. Although the country failed to win the FIBA Basketball World Cup in 2019, Jokić was named the second-best player.

The athlete’s personal life has been stable. He is currently dating his high-school girlfriend, Natalija Macesic, who moved to the USA and studied psychology there.

The couple prefers to keep their relationship away from journalists: Natalija’s Instagram page is private, and Nikola has no social network accounts at all.

In 2019, the center appeared in a hilarious commercial: one could see him shooting, and then a computer screen was shown. Long ago, when Jokić asked his Facebook friends if anyone would like to practice with him, he received no likes or replies. Things have changed dramatically since that time; the video is really inspiring for young athletes who might become sports stars soon.

In 2020, the athlete is enjoying the peak of his career. January 2020 was marked with a splendid game against the Utah Jazz, where Jokić helped the team win with the score 106-100; it is one of his best games so far. Besides, the man was named to another All-Star team as a reserve player.