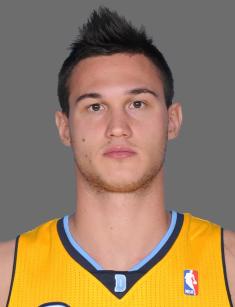 Danilo Gallinari is an Italian basketball player who joined NBA in 2008. He is currently employed at the Oklahoma City Thunder.

The future sportsman was born on August 8, 1988, into the family of Vittorio and Marilisa Gallinari. The boy’s father was a professional basketball player and performed for several teams in the Italian League. There were two kids in the family: Danilo and his brother, Federico.

After graduation, the young man continued his education at Catholic University of the Sacred Heart and immediately joined its college basketball team. He showed good skills in defense and proved to be a promising asset.

Young Gallo (“rooster” in Italian) entered the world of professional basketball in 2004 and became a member of a third-division club Casalpusterlengo. The next year, he had a chance to play in the second division and quickly caught the attention of experts; they called him the best Italian player of the championship.

Following the example of his dad, Gallinari chose Olimpia Milano among other teams and climbed to the highest division in the country. His excellent results made him the best under-22 player and the winner of the Italian All Star Game 3-point shootout competition.

2008 was marked with the new page in the athlete’s career: the New York Knicks decided to draft him. Although he missed the first season due to back surgery, he recovered and scored many valuable points.

In winter 2011, the Denver Nuggets bought Gallinari. He spent the NBA lockout period in Emporio Armani Milan and then returned to the USA but faced some trauma. 2015 was marked with a career-high 40 points, but an ankle injury happened the same year. He remained with the Nuggets until 2017.

The Los Angeles Clippers became the new home for two years; beneficial points were mixed with injuries. In March 2019, he celebrated the longest scoring streak in his career.

Today, Gallinari is a member of the Oklahoma City Thunder; he had few chances to play there, though, because of an appendectomy in August 2019.

As a junior, Gallinari represented his home country at the FIBA Europe Under-16 and Under-18 Championships.

2005 was significant in the young man’s career: he helped his team gain a bronze medal. However, an injury prevented the athlete from repeating his triumph at EuroBasket 2007.

In the early 2010s, there were speculations that Gallinari rejected Kim Kardashian, who was eager to become his girlfriend. Some paparazzi claimed Danilo was in love with Kim’s friend, Brittny Gastineau.

Today, the man is dating the model and TV personality Eleonora Boi. The couple began to see each other in 2018. Danilo calls the woman his fiancée, but when Eleonora becomes his wife officially is unknown.

Apart from his basketball career, Danilo has modeling experience: he collaborated with Armani and advertised their sports outfits.

2020 started with the rumors that Boston Celtics could trade for the sportsman; the details of the buyout remain unknown.

Danilo Gallinari’s net worth is $32 million in 2020; his annual earnings are about $22 million.