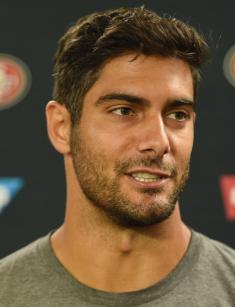 He is a talented football player who made several records and gained several prestigious accolades. Jimmy became a football star after his impressive play both as a college player and a professional athlete.

The football star was born in 1991. His big family includes a mother, a father, and three siblings. At school, he played both as a linebacker and as a quarterback. The high level of production on the field caught the attention of several football programs. Jimmy attended college with athlete scholarship, where he quickly made a name for himself.

Despite impressive Jimmy's success at college, that was only a prelude for him. He attracted the attention of the legendary coach of the Patriots, Bill Belichick. In 2014 he had to back up the football legend Tom Brady. The first years the young quarterback just sporadically appeared on the field. But the situation changed in 2016 when he made his breakthrough in a highly unusual way. When Brady had occurred to be out of the picture, in the result of penalties, that was Jimmy's time to shine.

However, even though he displayed impressive stats, the player stayed number two in the team. That's why he decided to change the team, the 49ers. In February 2020, the athlete made headlines when he missed Super Bowl hero moment on Emmanuel Sanders's overthrow. Brittany Matthews, who dates with the other footballer, displayed her support for Jimmy via her Instagram.

He is a demanded and promising athlete, whose net worth will probably skyrocket over the next decade. Nevertheless, the quarterback has already not need to think about money issues. As of 2020, his net worth is more than $43 million. In 2018 he signed the five-years-contract of $136 million. $70 million was the athlete's guaranteed financial reward. The size of the signing bonus was $35 million. Besides his primary source of income, he also collaborates with brands and appears on TV commercials. He is fond of high-end vehicles and has already purchased several luxurious cars. Besides, the athlete enjoys spending money on his family. He said,

"As far as helping my family, I do everything that I can for them. It is a blessed opportunity that I was given, and I'm trying to help as many people as I can."

Such kind of salary makes Jimmy one of the most eligible bachelors. The 28-years-old player stays single, and obviously, he isn't going to find a wife that year. He has got a tensed schedule and thoroughly focused on his career. However, the media talked much about his dating history. Many people named Alexandra King his girlfriend, even though he denied that fact.