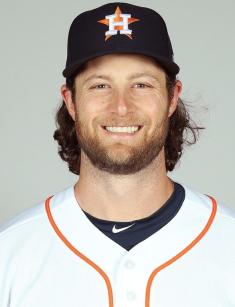 Gerrit Alan Cole is an American professional baseball pitcher for the Houston Astros of Major League Baseball. During his studies at the University of California, Los Angeles, Gerrit played college baseball. The sportsman demonstrated excellent skills during his sports career. He is the owner of many awards.

Gerrit was born on September 8, 1990. He is not the only child in the family. His younger sister's name is Erin. Cole's father motivated him to start a career of a professional sportsman. In his childhood, together with his father, Cole was a big fan of the Yankees team. The player admires Hall of Famer Lou Gehrig and retired pitcher Mariano Rivera, both Yankees legends. Gerrit watched the 2001 World Series, of which the Yankees took part.

Cole firstly got his education at Orange Lutheran High School. He played for the school's junior varsity baseball team. He became recognized after appearing in his junior year games. The sportsman demonstrated excellent results which led him further to higher achievements.

He got many awards during his studies at college. Later, Cole was selected by the New York Yankees for the 2008 Major League Baseball draft. Gerrit planned to attend the University of California, Los Angeles on a college baseball scholarship. He wanted to complete his studies first.

In his freshman year Gerrit became the team's Friday night starting pitcher. The sportsman was a member of the 2009 United States collegiate national baseball team. He also took part in the 2010 World University Baseball Championship. The year 2010 was a huge success in the career of the athlete. He contributed in making the Bruins the best baseball team in school history and the second best team in the country. The Bruins went on to play in the 2010 College World Series, but were defeated by South Carolina in the NCAA Championship Series. Cole's statistics declined in 2011, his junior year.

In the 2011 MLB draft, the player was named one of the best talents in the draft. He was offered to play for the Pittsburgh Pirates. The sportsman had a contract with an $8 million signing bonus. The athlete played for the Mesa Solar Sox of the Arizona Fall League (AFL) and started the AFL Rising Stars game.

Cole started the 2012 season with the Bradenton Marauders of the Class A-Advanced Florida State League, along with fellow starting pitcher Jameson Taillon.

Gerrit was greatly respected in the field. He was a famous player with fantastic progress.

The celebrity was promoted to the major leagues. In June, 2013, he made his MLB debut. Cole became the fourth pitcher since 1920 to win in his Major League debut. He was the fifth pitcher for any team to accomplish the feat in the past 40 years, joining Rich Gale of the 1978 Royals, Kaz Ishii of the 2002 Dodgers, Jered Weaver of the 2006 Angels and Scott Lewis of the 2008 Indians.

In September 2014, Cole again demonstrated his talents and skills: he helped the Pirates win the games by beating Alex Wood and the Atlanta Braves.

He was the Pirates' choice to start the 2015 National League Wild Card Game against the Chicago Cubs but took the loss after giving up four earned runs on six hits and a walk in five innings pitched.

In June 2016, the sportsman had to miss several games due to the injury.

The Pirates and Cole reached agreement in January 2018 on a one-year, $6.75 million contract. In January, 2018, the Pirates traded Cole to the Houston Astros.

The player was elected to his first American League All-Star appearance. Cole did not appear in the game but finished the first half of the season with perfect results.

In September, 2019, the sportsman became the second pitcher ever to strike out 14 or more hitters in three consecutive games.

There are many products that fans of the player can buy to support their favorite: jerseys, authentic baseballs, hoodies, and other attributes.

Cole is a married man. He is in a relationship with his wife Amy Crawford since November 2016. Amy is the younger sister of San Francisco Giants shortstop Brandon Crawford. The duo had a grandiose wedding ceremony. They engaged with each other in Newport Beach, California. The feast, held in July 2015, was attended mainly by family members. Cole and Amy met each other when they were students when they both were interested in sports. At present, the couple seems to be living a peaceful life. They prefer not to discuss their personal life openly.

Apart from sports, the sportsman is also known to be engaged in charity work.

The net worth of the celebrity is estimated at around $15 million as of 2019. According to different resources, his primary earnings come from a sports career.