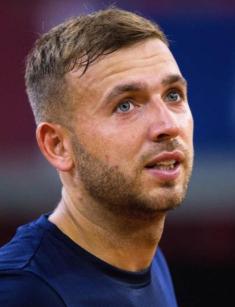 Daniel Evans is a British tennis player who has become number one in his country and number 33 internationally. Following a drug scandal in 2017, the man found enough courage to return to sport.

The future athlete was born on May 23, 1990. His mother, Bernadette, worked as a nurse, and the father, David, was a lineman. Daniel grew up with two older sisters.

Initially, the boy was fond of squash; he used to play it with his dad. However, when young Evans tried himself in tennis, it was pretty clear he had good abilities, and the family decided to help their son develop them.

At ten, Dan joined the private Edgbaston Priory Club and started training at the Leadership Training Academy three years later, moving to Loughborough. As the athlete remembered in his interviews, he did not feel good enough at first, even though he was fighting like a beast, but the endeavor paid off eventually: Evans became one of the best.

The young man began his career in 2004 and participated in the World Junior Tennis under the coach Mark Taylor.

In 2006, Daniel celebrated his triumph at Marcq-en-Baroeul but failed to qualify for Wimbledon junior contest. In 2007-2008, the athlete often reached quarterfinals and collaborated with David Rice and Dan Cox in doubles.

2008 marked the beginning of the senior career. Things were going not so fast, and the young man participated in several events, such as the Bournemouth and Edinburgh Futures and Artois Championships. Still, he lost his wild cards for a while. The Wrexham Futures brought the first victory.

Gradually, the young man began to participate in prestigious events: Wimbledon, US Open, Davis Cup. In 2013, he could leave tennis for financial reasons, but the victory over Evgeny Donskoy in the Davis Cup tie versus Russia improved the situation.

The first months of 2017 were successful, but Evans failed a drug test in April; it was revealed he had taken cocaine. A one-year ban gave him enough time to reflect on what had happened; the man found the strength to return to a tennis court. He appeared there first on April 28, 2018, and defeated his opponent Edward Corrie.

In 2019, the sportsman took part in the final of the Delray Beach Open and reached the top position in his country.

The sportsman prefers to keep his personal life secret. In 2017, the media talked about his girlfriend Georgina, who presumably worked at a local luxury vehicle plant.

Since 2018, some woman named Aleah has been mentioned as Evans’s partner. The couple does not have any children.

The beginning of 2020 was not favorable for Evans: he lost to his Russian colleague Andrey Rublev during the Adelaide International quarterfinal game. However, he is not upset and hopes to bring better news to his fans soon.