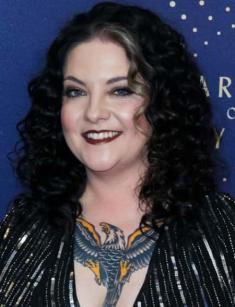 She is a famous country singer. Her bourbon-soaked voice brought fresh air in the traditional music style and immediately attracted attention after self-releasing her first album.

The singer was born in Arkansas on July 29 in 1983. When she was a teenager, Ashley played her father’s guitar. She has hot three siblings. That time her favorite music band was the Beatles. At the age of twelve, she began writing music. When she studied at the university, her major was music. Before fame, she worked in the guitar center.

The singer mentioned that she was born in the cattle farm. She had a musical family. Her father had a guitar. They also had a mandolin and a trumpet. Ashley said that her childhood was cloudless, and she enjoyed to grow in the Ozarks.

In 2019 the singer got prestigious accolades. She performed in Las Vegas, and the public praised her with a standing ovation. She has tours not only in the USA, today her fame has spread in the U.K., as well as Germany, Amsterdam, Switzerland, and Ireland. Her worldwide recognition proved to be a result of hard work. In order to pursue her music career, she moved to Nashville in 2007.

She sings country music. The singer brought her bourbon-soaked voice in a refreshingly raw way. She is transparent in interviews and tells about her musical experience. Interestingly, the singer’s song “I can’t live without you” is devoted to her roommate while her fans thought that this song is about her lover.

The singer prefers to keep the law social profile and talk about her relationships. People thought that Ashley was in connection with Andy, a man she devoted a song. But she said that they were best friends and had only a platonic relationship. She hasn’t been married. Her net worth is about $5 million.

In 2019 the singer gained CMT Music Awards in the title Breakthrough Video of the Year. Besides, she was nominated by Grammy Awards.