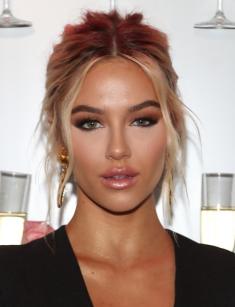 She is an American model and Instagram star. Delilah's parents are actors, and in some way, she preferred to follow their steps. Since childhood, the model enjoyed being in the limelight. She is a beautiful girl with multiple talents. It is not a big surprise that she began a modeling career. Besides, she succeeded in social media. Her account has more than millions of followers. All that makes her a model-on-the-rise with broad perspectives.

Delilah is a celebrity kid who had extra attention since childhood. That's why she got used to being in the spotlight all the time. It is not a big surprise that her future profession made her dragged her out into the limelight.

Her mother is an actress Lisa Rinna. Delilah appeared on the "The Real Housewives of Beverly Hills" alongside her mother.

Her father is Harry Hamlin, an actor, and a writer. She also has got a sister, a model Amelia Gray, and a half-brother, Dimitri.

She was born on June 10 in 1998, in California, where she spent much part of her childhood. Her ethnicity is white. Her parents were too busy due to their work, that's why the little girl was homeschooled. In 2007 she graduated from high school. There is no information about what college she attended. Probably she is balancing college and modeling.

Delilah is one of the IMG models. She is at the starting phase of her career. That's why there is little information about Delilah as a model.

She played her debut in fashion runway by walking the ramp at Tommy Hilfiger fashion show.

However, her modeling career hasn't given her broad acceptance, unlike her celebrity family and love affairs. Delilah made her TV debut when she appeared on the show "Harry Loves Lisa." Besides, she had gained wide popularity in social media. She has got one million followers on Instagram and about 28K subscribers on Twitter.

Her net worth is about $1 million. The average salary of the American models is about $32,000-$48,000. Her primary source of income is her Instagram; thus, her post costs from $2900 to $4800. She also did endorsements for Baja East and Pepe Jeans, which brought her extra money.

Delilah isn't married. It's rumored that the model dated Eyla Booker. The couple confirmed their relationship. It is known that they met at the Coachella.

The model's mother supports their relationship. Thus she shares photos of the couple on her Instagram account.