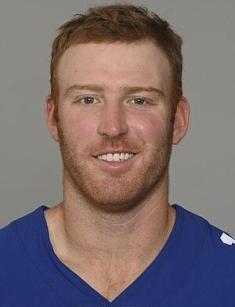 Cooper Robert Rush is a Michigan-native American quarterback football player who was born on the 21st of November 1993. His exact birthplace is the city of Charlotte. Cooper is of American nationality and white ethnicity. The faith he believes in is Catholicism.

Cooper is a popular sportsman who is better known for playing in the NFL.

Cooper was raised by an ordinary American family from Michigan. His dad's name is Todd Rush, while his mother is Julie. His dad was a football trainer. Cooper has sisters named Kennedy and Chandler. Even though Cooper was born in Charlotte, his entire childhood was spent in Lansing. He attended the Catholic High School in his hometown. In his childhood, Cooper played a lot of football and baseball. In both 2010 and 2011, he was a leader of the school football teams and played against various high schools. In 2012, Cooper enrolled in Central Michigan College and then graduated from it in 2016.

His successful career as a quarterback started when he studied in college. Throughout the time he played there, he finished his career with 90 touchdowns, 12.894 passing yards, and 49 straight starts.

Cooper's first professional team was the Dallas Cowboys, where he played. He signed as an undrafted free agent back in 2017. In 2018, Cooper played as a quarterback against the Jacksonville Jaguars team, and in 2019 against the New York Giants. And in 2020, Cooper was waived after the team signed another player.

When the New York Giants picked up Rush off waivers on May 5, 2020, he was reunited with offensive coordinator Jason Garrett, who had previously served as his head coach with the Cowboys. He was released on September 5, 2020, and the following day he was added to the practice squad. Rush was removed from the Giants' practice squad on September 29, 2020, to make room for another former Cowboys quarterback (Clayton Thorson).

In October, Cooper was signed again to the Dallas Cowboys' practice squad. He played against the Minnesota Vikings. In 2022, Cooper competed with the Cincinnati Bengals as a quarterback.

As of October 2022, Cooper is married to a woman named Lauryn Rush. The couple met each other while they studied at college. They have the same child, Ayla Rush. As many websites say, the spouses are expecting their second baby. It is currently unknown whether the baby will be a boy or a girl.

Here are the stats for Cooper Rush: