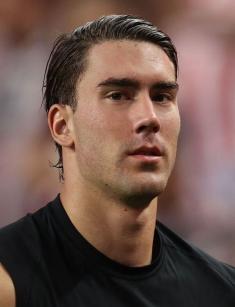 Dušan Vlahović is a prominent Serbian football player. He's an outstanding striker who plays for Serie A club Juventus and Serbian national team.

The future star was born on 28 January 2000 in Belgrade. His mom's name is Sladjana and his dad's name is Milos. Dušan has a younger sister, Andjela. His elder brother was killed in the war in Bosnia. There is a tattoo on Dušan's right hand that reminds him of his late sibling.

All the family has always supported Dušan in his endeavors. His sister used to accompany him to training sessions. His dad stays in close touch with his managers.

The boy wasn't sure whether he would manage to meet his career goals that were related to sports. His backup plan was to become a doctor.

He's also good at basketball. As a kid, he used to practice martial arts.

From the onset, Vlahović had to compete against older players. He was only 15 years old when he signed his first professional contract.

This striker has played for the following clubs:

Partizan (he was the youngest debutant in this team's history)

He was appointed a member of the Serbian national team. Scouts from Arsenal and a number of other established European clubs approached him but Dušan rejected those contracts.

This celebrity player was instrumental in helping his homeland qualify for FIFA 22. ESPN and other profile media often talk about him. Erling Haaland is the sportsman whom Vlahović is most frequently compared to, they share a similar style.

Throughout his career, this sportsman has been a Nike athlete. He always wears boots by this brand.

A bronze card of Vlahović is one of the most coveted collectibles among football fans.

The star joined Fiorentina, an Italian club, in 2018. In four years, Juventus offered him better conditions. His transfer to Juventus turned out to be the most expensive in that window, with a reported fee of €70 million. He got the jersey with the number 7 that previously belonged to Cristiano Ronaldo.

Dušan used to keep his private life out of the limelight. At a certain point, he was rumored to be romantically linked to Elena Kitić. This lady is Mile Kitić’s daughter — he's a renowned singer from Bosnia. To prove that it was not true, the footballer revealed the personality of his real girlfriend. It was Mariasole Pollio, an Instagram model. The couple was allegedly supposed to tie the knot but it never happened.

In 2022, Dušan had a brief affair with Carolina Stramare, an Italian beauty queen. Soon, he left her and switched to Maria Becerra, an Argentinian pop star.