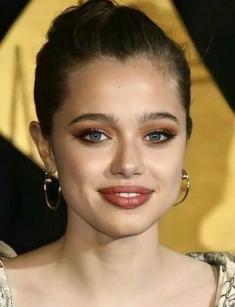 Shiloh Jolie-Pitt is the famous child of two popular actors, Brad Pitt and Angelina Jolie. Shiloh is the first biological kid of the couple, who was born on the 27th of May in 2006. She is of American nationality and white ethnicity. The faith she believes in is currently unknown. Her birthplace is Swakopmund, Namibia.

She is better known for being the child of popular celebrities. Now she is concentrating on her dance career.

When Angelina Jolie got pregnant, it was a real sensation because this child is the first who is fully biological. Even though Angelina and Brad Pitt already had children, some of them were adopted. The world was really interested in Shiloh after her birth. Angelina and Brad even sold photos of her to the paparazzi for 10 million dollars. Newborn Shiloh was adored by millions of people from all around the world.

She spent all her childhood in the US. Shiloh often appeared with her parents and siblings (Zahara, Knox, Vivienne, Pax, and Maddox) at various shows, events, and movie screenings. She went to a private high school, and other educational details about her are not known.

Shiloh tried her hand at acting because of her famous parents. Her debut was an appearance in The Curious Case of Benjamin Button. This happened back in 2008. She quickly gained a lot of fame and popularity after her release. She co-voiced a character in the Kung Fu Panda movie with Jackie Chan and Jack Black in 2016.

Even though Shiloh has been a girl since her birth, during her childhood she was often confused with a boy. Instead of women's stuff, she preferred only boys' hairstyles, clothes, and even names. Shiloh always asked herself to call herself John. Regardless, despite rumors that Shiloh wanted to become a man through surgery and hormonal therapy, she now feels at ease with her gender. She started wearing dresses, long hair, and make-up. One of her hobbies is dancing. She often visits The Millennium Dance Complex. Who knows, maybe one day she will become a professional dancer.

Years ago, Angelina Jolie wrote a long article for Time in which she said that her daughters Shiloh and Zahara underwent operations (although which ones she did not specify), and urged all women to be strong. In 2021, paparazzi caught 14-year-old Shiloh in the suburbs of Los Angeles. The girl, who underwent hip surgery, was seen on crutches in the company of her sister Zahara and several friends in Burbank.

Despite all the rumors, the surgery Shiloh went through wasn't about gender switching. Even though in her past she wanted to become a boy, now she is still a girl, as she was at the moment of her birth.

Here are the full lists of projects that Shiloh joined throughout her life: