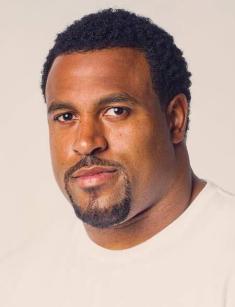 Duane Brown is an American football star. He plays as an offensive tackle for the New York Jets of the National Football League.

Duane was born on August 30, 1985, in Richmond, Virginia. His parents' names are Myra and Dennis. The star has a brother.

Several of his family members were diagnosed with diabetes. That's why the sportsman serves as an ambassador for the American Diabetes Foundation.

In school, Brown was good not only at football but also at field track and basketball. Plus, he played saxophone in a band.

Brown has excellent PFF stats. In 2023, his base salary is projected to reach $9 million.

In 2008, the Houston Texans selected Duane in the first round of the NFL Draft. The next year, he hit the news headlines for his brilliant play when he protected Matt Schaub's blind side. Matt was his team's quarterback.

In 2012, the Texans offered a 6-years extension to Duane. He was guaranteed to get over $22 million. The total sum of the offer exceeded $53 million. During that period of his career, Brown became a member of the All-Pro Team and was appointed to play in the 2013 Pro Bowl.

In 2016, this sportsman suffered from two injuries. He tore his quadriceps tendon and damaged his knee. The former trauma required surgery.

When Duane had two years left till the end of his contract with the Texans, he failed to attend the team's minicamp even though it was mandatory. To punish him for lack of discipline, the management placed him on the reserve/did not report list. In 2017, Duane came back to his normal schedule.

In 2017, the Seahawks traded Brown for another sportsman. The next year, this team offered him an extension until 2021. According to the rules of this offer, the renowned footballer received over $36 million.

In 2018, he was named second-team All-Pro. During his final year with the Seahawks, he was appointed a Pro Bowl member.

Duane joined this team in 2022. The Jets offered him a contract worth $22 million. He was supposed to stay with the club for two years.

Originally, Brown was to replace another player who was recovering from a knee injury. Soon, he got injured and couldn't play for a while because of his shoulder. However, at the beginning of October, Duane was back on the field.

The star spent around ten years with Devon Anjelica, alternatively known as Devi Brown. She's a journalist from Los Angeles.

Brown fell in love with her when she was a morning show host on Sirius XM's Shade 45. He proposed to her in 2011, a few months after he got to know Devon in person at her birthday party in a nightclub.

They were married for 10 years till 2021 until they decided to divorce. The couple has two sons and a daughter.