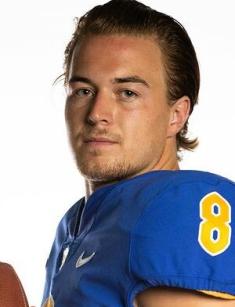 Kenneth Shane Pickett, who is better known as Kenny Pickett, is a popular New Jersey native and football quarterback. He was born on the 6th of June, 1998. Kenneth is of American nationality and mixed ethnicity. The religion he believes in is currently not known.

Kenneth plays for the Pittsburgh Steelers in the NFL. He was raised in Ocean Township, a city in New Jersey, US. Kenneth started his journey when he studied at college in Pittsburgh. He is better known for winning the Johnny Unitas Golden Arm Award and playing in the 1st round of the 2022 NFL Draft.

He spent his entire childhood in Ocean Township, where he went to high school. He was good at sports (especially football) from an early age, because Kenneth's dad, Ken Pickett, played football for a college team. His dad had many awards and was the best player in university. Kenneth's mom, Kasey Pickett, was a soccer player along with Ken.

Before moving to the NFL, Kenneth played five football seasons in college (2017–2021) for the Pittsburgh Panthers as a quarterback. As a junior, Kenneth led the Ocean Township Spartans to the New Jersey Central Group III semifinal game with a 9-2 record. In his senior year, he ranked Pickett as the No. 23 overall high school football player in New Jersey. During his career, he tossed for 4,670 yards and 43 touchdowns while also rushing for 873 yards and 17 scores. Kenneth committed to playing collegiate football at Temple University before switching to the University of Pittsburgh.

After starter Mitchell Trubisky was benched in the second half of a Week 4 defeat to the New York Jets, Pickett made his NFL debut. In the 24-20 defeat, he ran for two touchdowns and completed 10 of his 13 throws for 120 yards, but he also threw three interceptions. Pickett fired a long ball to Chase Claypool on his first career pass attempt, but it bounced off his hands and was picked off by Jordan Whitehead. Pickett scored his first touchdown in the NFL on his second drive, a scramble into the end zone. In his first career start against the Buffalo Bills, Pickett completed 34 of 51 passes for 327 yards and an interception in a 38-3 loss.

Kenneth is engaged to his girlfriend, Amy Paternoster. He has an Instagram account where she often shares pictures of him. By the way, his net worth is about 5 million dollars. Kenneth prefers to spend his free time with his family and friends when he is not training.

Here is the full list of achievements and awards Kenneth gained throughout his football career: