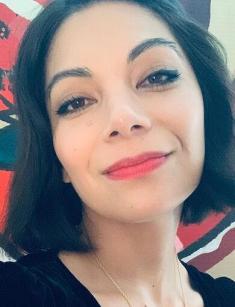 Ginger Gonzaga is an American comedian and actress. She's good at improvisation and singing jazz.

The star was born on May 17, 1983, in Modesto, California and spent her early years there. Her mom's name is Adele, she's of Dutch origin. Her dad's name is Christopher, he's of Filipino descent.

When Ginger was a young kid, she enjoyed mimicking her Filipino grandmother. She would dress like that lady and draw wrinkles on her face. She would put on a show for her neighbors to make them laugh.

Her college roommates were guys. Even though Ginger hadn't yet begun to take acting seriously, these boys admired her jokes. They memorized them to impress the ladies whom they fancied.

At university, Gonzaga specialized in political science and Chinese. She turned out to be a talented debater and impromptu speaker.

In her sophomore year, Ginger visited an audition at an improvisation theater and was admitted to it from the first attempt. After receiving formal training in acting, she performed at comedy clubs in Los Angeles and at the US military bases in South Korea.

In 2010, she debuted on TV in The Good Guys series. In two years, she made her inaugural appearance in a movie that was called Ted.

In 2022, one of her most prominent appearances on the screen was the scene in She Hulk: Attorney at Law. Her character sent another protagonist, who used to be a librarian, a "thirst trap" selfie with a bunch of books. Fans compared this show to the well-known Lucifer series.

Another famous role of hers was in I'm Dying Up Here, where she acted alongside Sebastian Stan.

In 2017, Gonzaga debuted as a film director. She released a short film that she wrote herself. It was called Your Day. She acted there together with Jason Ritter.

Ginger lives in Hollywood and performs as a jazz singer in various local venues. She adores the music and the atmosphere of the 1920s.

One of her best friends is Aisling Bea, an actress.

Together with the celebrity cast of General Hospital, she took part in a charity bowling event to combat child abuse.

This actress is bisexual. She has never had an official husband.

For a few years, she was dating someone whom she referred to as her boyfriend. She posted his photos in her Instagram profile without revealing his personality.

In 2018, she began to date Jim Carrey. They performed in a TV series together. In a few months, they hit the red carpet as a couple for the first time. Their relationship lasted for around one year.