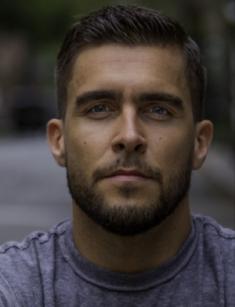 Josh Segarra is a Florida-born TV and theater actor. He was born on the 3rd of June 1986. Josh is of American nationality and white ethnicity. The faith he believes in is currently not known.

Josh is better known for starring in such movies as Arrow, Orange Is the New Black and The Electric Company. Josh is from Longwood, Florida.

Josh speaks Spanish with ease and is of Puerto Rican origin. Despite wanting to be a professional wrestler, he learned to sing at his Pentecostal church. He graduated from the Tisch School of the Arts and New York University.

He spent his entire childhood in Florida but then moved to New York. His parents immigrated from Puerto Rico. It is known that their names are Enrique and Damaris Segarra, but other details are not known.

Josh played the lead character of Hector Ruiz in the PBS Kids Go television program The Electric Company from 2009 to 2011. Later, he created the character of Mick in the Lysistrata Jones musical. Josh's casting for the Off-Broadway world premiere of Dogfight, a musical based on the same-named movie with music and lyrics by Benj Pasek and Justin Paul and a book by Peter Duchan, was revealed in May 2012. On July 16, 2012, the musical had its debut at the Tony Kiser Theater at Second Stage Theater. He returned for the first season of the comedy television show Sirens two years later, and in the following year's second season, he was given the title of series regular.

Josh has recurring roles as a preacher in the musical film Christmas on the Square and as a special agent during the third season of the criminal drama series FBI in 2020. In the forthcoming NBC comedy pilot Night School, which is based on the same-titled 2018 movie, he will play Teddy Walker. He was hired to appear in the Disney+ superhero show She-Hulk: Attorney at Law in July 2021.

On October 17, 2014, Josh married his longtime girlfriend Brace Rice. The couple had their first child, a son, on September 30, 2016, and their second child, also a son, was born on January 8, 2020. He and his wife both like sports, so when he has free time, Josh trains a lot. His hobbies are traveling, reading, and photography.