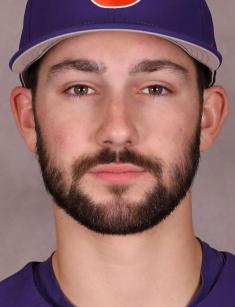 Spencer Strider is a professional American baseball star. He plays as a pitcher for the Atlanta Braves of Major League Baseball.

Spencer was born on October 28, 1998, in Columbus, Ohio. He attended the Christian Academy of Knoxville in Tennessee. Strider got his love for baseball stats from his mom, Bonnie, who is a former softball star who played third base for Thomas Worthington High School.

His jersey number is 65. The value of his rookie card might reach $600.

In 2019, this sportsman became a vegan to better cope with high blood pressure. He has confirmed in various interviews that this was a smart decision.

In high school, Spencer and his teammates used to dye their hair blond and grow facial hair. Because of that ritual, his friends dubbed him The Mustache Man.

In 2017, he could have signed with the Cleveland Indians but didn't use this opportunity. He preferred to be a member of the Clemson Tigers.

In 2019, Strider had to miss the whole season. He underwent surgery because of an injury. The next year, he was back in the game and joined the Atlanta Braves.

Spencer switched to professional sports in 2021. In mid-Autumn, he joined the Atlanta Braves' active roster and debuted in the major league. On the last day of that season, he made his first career win. That year, his team became the winner of the World Series. It was the first title it managed to get within 26 years.

The next year, Strider joined the team's Opening Day roster. In July, he was named the Rookie of the Month of the National League. In two months, he set a new record for being the fastest pitcher in either the National League or the American one. Within one season, he managed to strike out 200 batters. No other rookie has ever made an identical achievement in the terms of the franchise. The last time other sportsmen did something similar was at the end of the 19th century.

In 2022, Spencer got injured. After he recovered, he played vs Phillies. His agent secured excellent terms of the contract for him. The star will remain with the Braves until 2029 and will get $75 million for that.

Given Spencer's outstanding stats, fans will be likely to see him in all star games one day.

In November 2022, the sportsman is planning to tie the knot with Margaret Whitener. He proposed to her in February. Their relationship began 5 years ago when both were attending the same high school.

Very little information is available about Spencer's better half. Unlike girlfriends of many celebrity sportsmen, Maggie is not an Instagram model or a TV host. Her boyfriend has hinted that she's a coach. However, her exact competencies remain a mystery.

This lady was born on September 24, 1998, in Cartersville, Georgia. Her mom, Sussie, is a board member of the Women's Fund of East Tennessee. Her dad, Gordon, is an expert in investment and consulting. He launched The Whitener Company, LLC and controls it.