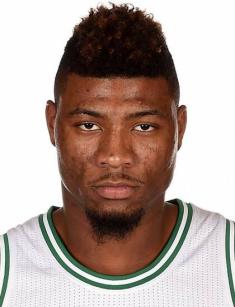 Marcus Osmond Smart, a Texas-native basketball player, was born on March 6, 1994. He is known for playing for the Boston Celtics as a point and shooting guard. He is of American nationality and black ethnicity.

Marcus graduated from Oklahoma State University. He is also known for playing for a college basketball team, the Oklahoma State Cowboys. Now he is an NBA member who plays for the Boston Celtics under the number 36. In the past, he played for the Maine Red Claws.

Marcus was raised in Texas, in the city of Flower Mound. His mom, Camellia, passed away in 2018 due to illness. In his childhood, Marcus lived along with three other brothers and went to the local high school in the town where he was born. He started playing for the school basketball team, but when he had free time, he preferred to play some tennis occasionally. At the end of his high school education, Marcus was considered the number one basketball shooting guard in the nation, while as the best player, he got the 10th position in the rating.

His career started back in 2014 when Marcus first attended college. Marcus guided the Oklahoma State Cowboys to a 24-8 record and a third-place finish in the Big 12 during his first season there, trailing only Kansas and Kansas State. On April 7, 2014, Smart announced his intention to skip his remaining two years of NCAA eligibility and enter the NBA draft.

Marcus was chosen by the Boston Celtics as the sixth overall choice in the 2014 NBA Draft on June 26, 2014. He received 142 votes, which led to his selection to the NBA's All-Rookie Second Team on May 18. While representing the Celtics on July 16, 2015, Marcus injured two of his right hand's fingers. He equaled his career best of 26 points on January 31, 2016, in a defeat to the Orlando Magic. He tested positive for COVID-19 on March 20, 2020. The NBA season has been indefinitely suspended as a result of this. One of the first NBA players to openly address the issues surrounding COVID-19 and the need for the public to take the condition seriously was Marcus.

Marcus has a salary of $1.3 million per year. Not much is known about his personal life. According to the information, he is possibly single and not dating anyone. Marcus still resides in Texas along with his family.