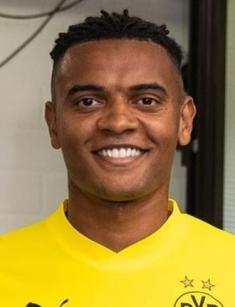 Manuel Obafemi Akanji is a popular Switzerland-raised football player who plays for Manchester City F.C. under the number 25 and for the national football team of Switzerland under the number five. He was born on the 19th of July, 1995. He is of Swiss nationality and black ethnicity.

Raised in Neftenbach, Switzerland, Manuel was born to Abimola Akanji and Isabel. By the way, his mom is truly Swiss, while his dad is from West Africa. He spent his entire childhood along with his two siblings, Sarah and Michelle. In his family, Manuel is the second child. It is known that his parents were also sportsmen.

In his hometown, he went to the high school where he played for the local football team. Details about his college or university education are missing.

Manuel started up the Wiesendangen neighborhood club. He switched clubs in May 2007 and then started playing in Winterthur's youth squad. Manuel played for Winterthur in the 14–15 Challenge League after appearing in two games for them in the second half of the 13–14 campaign.

Then, on January 15, 2018, Manuel moved to Borussia Dortmund for 18 million euros. He received harsh criticism for his costly mistakes throughout the 2019–20 season. One of the primary individuals picked up as the team's weak link was Manuel.

Manuel signed a deal through 2027 on September 1, 2022, to join Manchester City. The stated signing bonus was £15 million. Some days later, he started his first game for Manchester. He also started his first Premier League match, a 3-0 victory away at Wolverhampton Wanderers. By the way, Manuel was a member of the 23-man Swiss World Cup team that traveled to the Russian Federation in 2018. Additionally, on September 24, 2022, Manuel scored the winning goal in a UEFA NL match.

Since 2019, Manuel has been married to Melanie Windler. When Manuel has free time, he spends it with his wife. He trains a lot to keep his good form. He still resides in Switzerland with his family.

Throughout his career, Manuel became the winner of the following football cups: